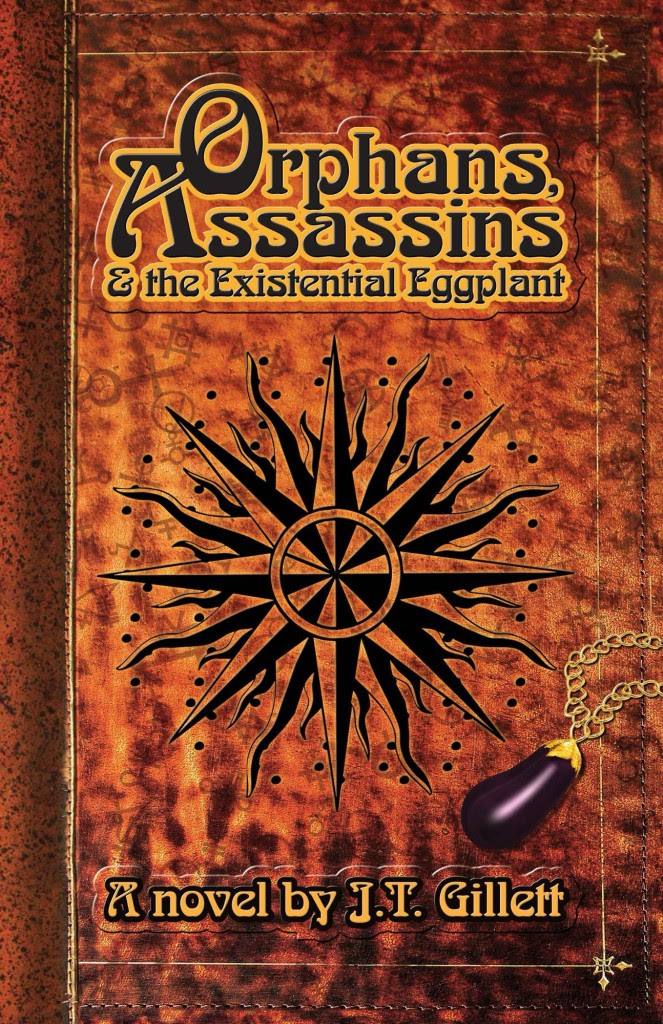 Orphans, Assassins and the Existential Eggplant explores the quirky side of historical fiction. The novel takes you on wild ride through the early 13th century with a female alchemist, orphan teenager and a 600-year-old, shrunken eggplant that can speak to whomever wears it. In search of the fabled Lost Stone of Eden, they cross Europe and the Mediterranean with the Children’s Crusade, hijack a caravan in the Sahara desert, live with hashish-fueled Assassins in the mountains of Persia and rediscover paradise on the island of Bahrain.

Aaron and the girls slept for a few hours during the hottest part of the day, then rode through the evening and the entire night, taking only a few breaks to rest the camels. They didn’t catch up to any slow-moving caravans, come upon an oasis or see fires in the night. Everything around them seemed the same, day after day. Same mirrored sky. Same scorching sun. Same sound of camel farting and plodding. Same sad, ivory scent of emptiness.

“Are we dead?” asked Donatelle as they shared the last of the water. They were sitting atop a tall dune and could see nothing but more dunes in every direction.

“Do you feel dead?” Aaron had to ask, knowing that in the middle of this terminal landscape, it was a good question.

“Death is much different—and much luckier,” guessed the eggplant.

Aaron hoped the eggplant was right, but he chose a different answer for Donatelle. “Whenever I’m not sure, I listen for my heartbeat. The pounding inside me says I’m alive in this world and even though we’re in a dead place, we’ll survive. We’ll find something soon, or something will find us.”

Something took the form of a humming dark cloud on the horizon. They watched as it grew darker, stretched across the dunes and started to roar like steady, rolling thunder.


Praise for Orphans, Assassins and the Existential Eggplant

"Good stories rise and fall like empires in the endless pursuit of happiness, like armies of lovers marching to paradise - good stories change the world." So begins Part One of Orphans, Assassins and the Existential Eggplant. This book is such a good read. I read it on the plane to Hawaii, and it soared with me through the sky. My wife kept asking what was so funny as I giggled and laughed in my seat. This story changed me, in that flying is such a drag these days, and this book kept coming up with surprises, weaving together stories of gods, goddesses, orphans and assassins, the pursuit of the unattainable, and existential conundrums.

I have had the opportunity to read some of Mr Gillett's poetry (especially "This is My Last Poem" - I hope this is not his last novel), and in this novel, he brings his poetic ability to sublimely transport the reader to new views of the mundane, new opportunities for transformation, and new ways of understanding my own self. What more could I ask for in a book.

Steal this book if you need to, but get it and read it with joy." - Paul Rerucha, Amazon Reviewer

"I don't read a ton of books for pleasure but I did read this one on the recommendation of a friend. It kept me captivated and I ended up finishing it in 2.5 days. This is the kind of book that makes me want to read more often." - B. H., Amazon Reviewer


Orphans, Assassins and the Existential Eggplant Available at Amazon

J.T Gillett holds degrees in philosophy and journalism from the University of Oregon and studied at Naropa Institute’s Jack Kerouac School of Disembodied Poetics. His stories and poems have appeared in a variety of Literary Journals, including City Lights Journal, edited by Lawrence Ferlinghetti.

For more information please visit the Orphans and Assassins website and blog.

Monday, June 22
Passages to the Past

Wednesday, June 24
Unshelfish
To Read, Or Not to Read

Friday, June 26
Book Nerd
What Is That Book About