Flask of the Drunken Master by Susan Spann Excerpt and Giveaway 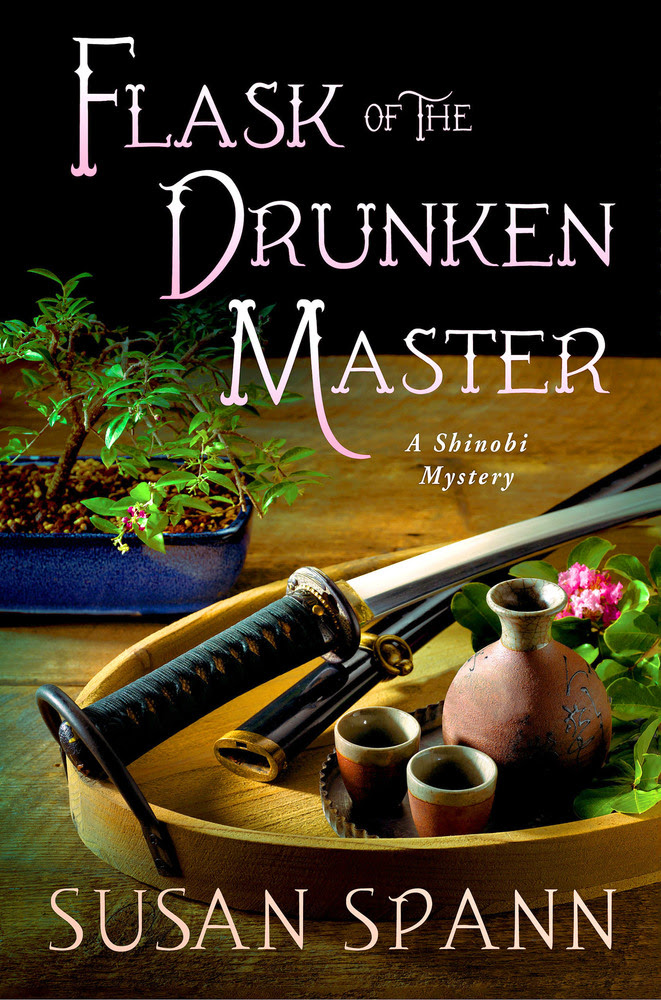 August 1565: When a rival artisan turns up dead outside Ginjiro's brewery, and all the evidence implicates the brewer, master ninja Hiro Hattori and Portuguese Jesuit Father Mateo must find the killer before the magistrate executes Ginjiro and seizes the brewery, leaving his wife and daughter destitute. A missing merchant, a vicious debt collector, and a female moneylender join Ginjiro and the victim's spendthrift son on the suspect list. But with Kyoto on alert in the wake of the shogun's recent death, a rival shinobi on the prowl, and samurai threatening Hiro and Father Mateo at every turn, Ginjiro's life is not the only one in danger.

Will Hiro and Father Mateo unravel the clues in time to save Ginjiro's life, or will the shadows gathering over Kyoto consume the detectives as well as the brewer?

During my recent research trip to Japan, I spent a night on Miyajima, a sacred island off the coast of Hiroshima. The island is home to several Buddhist temples and Shinto shrines, as well as several hundred sacred deer (sika, in Japanese) whose protected status leaves them with no fear of humans. 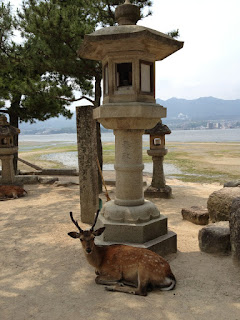 The deer wander the island unimpeded. Many are so tame that they approach the visitors, hoping for a handout or a scratch behind the ears. (Signs do warn that the deer are wild, and ask the tourists not to feed them, but it’s clear the deer would rather we ignored the signs.) 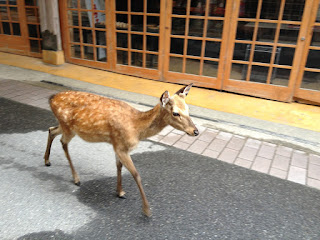 After spending a lovely, misty morning climbing Miyajima’s sacred mountain (Mt. Mizen)—and getting caught in a rainstorm on the way down—my son and I decided to have lunch in one of the lovely little restaurants that line Miyajima’s shoreline. After making our choice, we approached the door…and a deer attempted to follow us inside.

The antlered interloper met us several feet from the entrance, matched my pace, and would have followed me all the way to the table had the restaurant owner not stopped him at the door.

The owner welcomed us with a bow and a greeting, stepped in front of the deer, and scratched the animal’s floppy ears the way he would welcome a favorite dog. As he did, he backed the deer out over the threshold and into the street in front of the shop, where he gave it a final pat, told it to stay, and returned inside. The sliding doors closed behind him, leaving the deer to watch us through the glass. 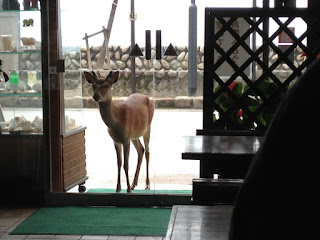 Which it did, through our entire meal.

The scene repeated itself each time a customer entered the restaurant. The deer attempted to join the party, the owner diverted it with affection, and the deer resumed its watch at the restaurant door.

The deer’s behavior—and that of the owner—reminded me of Ginjiro the sake brewer and Suke the monk, two of my favorite characters from my newest mystery, Flask of the Drunken Master. Suke the monk spends most of his time in a corner of Ginjiro’s sake shop, begging food and drinks from the patrons. At times, Ginjiro considers Suke a nuisance, but he also cares for the vagrant monk. I saw a similar kindness in the restaurant owner’s relationship with the deer. He clearly cared for the animal deeply, despite its annoying determination to beg a lunch from his patrons.

When a rival brewer turns up dead in the alley behind Ginjiro’s brewery, Suke the monk attempts to return Ginjiro’s kindness by proving the brewer’s innocence. Unfortunately, Suke’s investigative skills have all the grace and subtlety of a deer set loose in a teahouse…and Hiro, my ninja detective, must find a way to solve the murder despite—and perhaps with the aid of—Suke’s well-intentioned blundering.
Suke was one of the readers’ favorite characters in the first Shinobi Mystery, Claws of the Cat, and he’s one of my favorites too. I’m glad that Flask of the Drunken Master gives him a chance to shine.

Susan Spann writes the Shinobi Mysteries, featuring ninja detective Hiro Hattori and his Portuguese Jesuit sidekick, Father Mateo. Her debut novel, CLAWS OF THE CAT (Minotaur Books, 2013), was a Library Journal Mystery Debut of the Month and a finalist for the Silver Falchion Award for Best First Novel. BLADE OF THE SAMURAI released in 2014, and her third novel, FLASK OF THE DRUNKEN MASTER, releases on July 14, 2015. Susan is also a transactional attorney whose practice focuses on publishing law and business. When not writing or practicing law, she raises seahorses and rare corals in her marine aquarium. You can find her online at http://www.SusanSpann.com, on Twitter (@SusanSpann), and on Facebook (SusanSpannAuthor).

Praise for Claws of the Cat

"Spann matches period detail with a well-developed whodunit plot in her promising debut, the first in a new series set in 16th-century Japan."

Book One: Claws of the Cat (Library Journal Mystery Debut of the Month)
Book Two: Blade of the Samurai
Book Three: Flask of the Drunken Master

Flask of the Drunken Master Available at 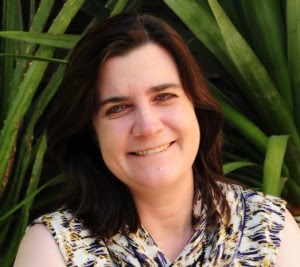 Susan Spann acquired her love of books and reading during her preschool days in Santa Monica, California. As a child she read everything from National Geographic to Agatha Christie. In high school, she once turned a short-story assignment into a full-length fantasy novel (which, fortunately, will never see the light of day).

A yearning to experience different cultures sent Susan to Tufts University in Boston, where she immersed herself in the history and culture of China and Japan. After earning an undergraduate degree in Asian Studies, Susan diverted to law school. She returned to California to practice law, where her continuing love of books has led her to specialize in intellectual property, business and publishing contracts.

Susan’s interest in Japanese history, martial arts, and mystery inspired her to write the Shinobi Mystery series featuring Hiro Hattori, a sixteenth-century ninja who brings murderers to justice with the help of Father Mateo, a Portuguese Jesuit priest. When not writing or representing clients, Susan enjoys traditional archery, martial arts, horseback riding, online gaming, and raising seahorses and rare corals in her highly distracting marine aquarium. Susan lives in Sacramento with her husband, son, three cats, one bird, and a multitude of assorted aquatic creatures.

Monday, July 6
Excerpt at What Is That Book About

Thursday, July 9
Interview at Oh, for the Hook of a Book!

Thursday, July 30
Guest Post & Excerpt at at Oh, for the Hook of a Book!
Spotlight at CelticLady's Reviews

I have one copy of Flask of the Drunken Master to give away. It's open to US residents only. You must be at least 13 years old to enter.