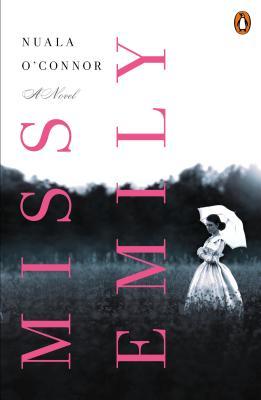 ABOUT THE BOOK
Eighteen-year-old Ada Concannon has just been hired by the respected but eccentric Dickinson family of Amherst, Massachusetts. Despite their difference in age and the upstairs-downstairs divide, Ada strikes up a deep friendship with Miss Emily, the gifted elder daughter living a spinster’s life at home. But Emily’s passion for words will dominate her life: she will wear only white and avoids the world outside the Dickinson homestead. When Ada’s safety and reputation are threatened, however, Emily must face down her demons to help her friend, with shocking consequences. Emily and Ada are mistress and servant. This novel asks whether either of them can escape the power of the circumstances they were born into.

ABOUT THE AUTHOR
Nuala O’Connor has worked as a bookseller, a librarian, and in a writers’ center. She was shortlisted for the European Prize for Literature, and her short story “Peach” was nominated for a Pushcart Prize. She lives in East Galway, Ireland, with her husband and three children.

PRAISE
“A superb novel, I was captivated from the first page. With gorgeous, compelling period detail and graceful prose, Nuala O’Connor reimagines a friendship between one of our greatest poets and her Irish maid. With uncanny insight into the expected portrayal of a servant-mistress relationship, and in keeping with the power and beauty of Dickinson’s poetry, O’Connor celebrates her women with great delicacy and exuberance.”
—Kathleen Grissom, bestselling author of The Kitchen House

“I read this wonderful novel in a gulp. Nuala O’Connor is a gifted storyteller with a poet’s eye for detail. We are offered a tantalizing glimpse into the private life of one of America’s greatest poets, but for me, the real triumph is the character of Ada, Emily’s young Irish maid. It’s Ada who is the heart of this novel.  She’s as beautifully realized as the gingerbread she so meticulously bakes with Emily. I can’t wait to read what O’Connor writes next.”
—Natasha Solomons, New York Times bestselling author of The House at Tyneford

“Beautifully written and utterly compelling, this vivid portrait of Emily Dickinson examines her humanity, complexity and profound relationship with words.  Told in her own eloquent voice and that of her trusted maid, MISS EMILY deftly braids together the stories of two intriguing women in this highly accomplished novel.”
—Cathy Marie Buchanan, New York Times bestselling author of The Painted Girls

“Nuala O’Connor’s MISS EMILY is evocative, thought-provoking, and beautifully rendered; a poignant portrait of two very different women, drawn together in unlikely friendship by a common strength of spirit and mind. Readers will delight in this richly imagined glimpse into the worlds—both inner and outer—of the immortal Emily Dickinson. I wanted to race through the novel, and yet, the language was so engrossing that I forced myself to slow down, just enough to savor each sentence.”
—Allison Pataki, New York Times bestselling author of The Traitor’s Wife and The Accidental Empress

“A jewel of a novel, MISS EMILY by Nuala O'Connor is a fascinating, heartfelt, and captivating glimpse into the mind and heart of Emily Dickinson, one of America’s most beloved poets, interwoven with the story of her spirited, witty, and devoted Irish maid, Ada. With its luminous prose and sympathetic, realistically drawn characters, you will feel yourself irresistibly drawn into Emily’s and Ada’s private worlds with every turn of the page.”
—Syrie James, bestselling author of Jane Austen’s First Love and The Lost Memoirs of Jane Austen

“This beautifully-crafted biographical novel vividly evokes Emily Dickinson and her world: her obsessive solitude, her sensual relationship with her sister-in-law, her conflicted relationship with her brother, and, most central, her companionable friendship with Ada, a spunky and superstitious Irish maid. Alternating between the stories of Emily and Ada, the novel brims with the charming details of their domestic life, the unfolding of a sweet romance, yet also, ultimately, brings to light the tragic effects of a violent reality that most often goes unmentioned, even today. This is an intensely engaging, emotional and important story, exquisitely rendered. Brilliant!”
—Sandra Gulland, author of the internationally bestselling Josephine B. Trilogy

“Like a Dickinson poem, MISS EMILY seems at first a simple story of friendship, but gradually reveals itself as a profound meditation on the human condition. O’Connor accomplishes this unfolding, just as Dickinson did, with her exquisite use of language.  I lost myself in the beautiful detail of 1860s Amherst, a cast of characters that leapt off the page with life, and the constant reminder that words, properly wielded, can transcend time, transmit love, and, above all, inspire hope.”
—Charlie Lovett, New York Times bestselling author of The Bookman’s Tale

“The structure of the book is reminiscent of one of Emily Dickinson’s poems, a lyrical dialogue between two distinct voices.  Ada and Emily are divided by class, ethnicity, learning, circumstance; but a deep empathy and shared humanity unite them as women.  This is a bittersweet story of repressed passion, thwarted opportunity, and the selflessness that is the essence of love.”
— Stephanie Barron, bestselling author of the Being A Jane Austen Mystery series

“An absorbing and provocative take on the inner life of a brilliant poet and her increasingly shrinking universe. The Dickinson household of Amherst, Massachusetts is complex and very odd indeed and the tension builds towards shocking consequences for all involved.  Nuala O’Connor’s prose skillfully and lyrically creates Emily Dickinson’s voice and that of her young Irish housekeeper who chronicles the poet’s harrowing struggle to find the freedom to write while living a cloistered life at home.  A novel you won’t want to put down.”
—Jennifer Kaufman and Karen Mack, authors of Freud’s Mistress

“MISS EMILY is an intricate, intimate novel that, in its careful attention to language, pays homage to our most American poet's extraordinary work. There are references to that work, rewards to true Dickinson aficionados, secreted in O’Connor’s prose, but this novel achieves a broader aim too: it tells a story of friendship that keeps us turning the pages.”
— Kelly O'Connor McNees, author of The Lost Summer of Louisa May Alcott and The Island of Doves

“Secrets will always out. In the same way as Emily Dickenson’s poems were once the best kept secret in Massachusetts, Nuala O’Connor’s luminous prose has long been one of Ireland’s most treasured literary secrets. Now through her superb evocation of 19th century Amherst, an international audience is likely to be held rapt by the sparse lyricism and exactitude of O’Connor’s writing. Through a fusion of historical ventriloquism and imaginative dexterity, O’Connor vividly conjures up—in the real-life Emily Dickenson and the fictional Ada Concannon—two equally unforgettable characters who pulsate with life in this study of the slowly blossoming friendship between a delicate literary recluse and a young Irish emigrant eager to embrace the new world around her.”
— Dermot Bolger, playwright and author of The Journey Home and The Venice Suite, among others

“I finished this morning and had to write to you straight away! My goodness—what a wonderful, wonderful book. I feel so privileged to have read it; I honestly cannot praise this book enough. Nuala O’Connor’s beautiful writing sings from every single page as Emily and Ada’s fascinating story unfolds. An absolute joy to read—I will be telling everyone about this book.”
—Hazel Gaynor, New York Times bestselling author of The Girl Who Came Home

“An original portrayal of Emily Dickinson seen here not just as a lover of words, but as a heroine and friend to a plucky Irish maid who casts a new and sympathetic light on the Belle of Amherst.”
—Sheila Kohler, author of Becoming Jane Eyre

“Nuala O’Connor casts a keen, compassionate eye below the veneer of domesticity to illuminate the passion, pain, and life force behind the poetry of Emily Dickinson. Quietly elegant and moving, poignantly humane, MISS EMILY is a rare gift.”
—Ania Szado, author of Studio Saint-Ex

Thanks to Penguin Random House, I have a copy to give away to a lucky reader. You must be at least 13 years old to enter. You must have a US address.