Guy Gavriel Kay has a new novel coming out!

By Marcie - July 15, 2015
Today Penguin Random House announced a new novel by the international best seller and multiple award winning Guy Gavriel Kay.Guy Gavriel Kay’s work has been described as “elegant, sweeping, and colorful” (San Francisco Chronicle), “resonant and powerful” (Washington Post Book World), and “wonderfully imaginative” (Publishers Weekly).  A #1 bestseller in Canada and an international award-winning author, Kay blurs the lines of genre.  Like A.S. Byatt who conceives of fantasy as an alternative to—rather than an escape from—everyday life, Kay uses elements of the fantastic to examine themes of history. It doesn't come out until May of 2016, but it's not too early to put it on your wishlist! 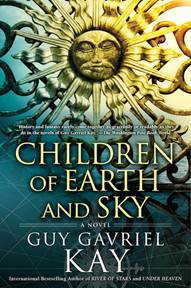 The bestselling author of the groundbreaking novels Under Heaven and River of Stars, Guy Gavriel Kay is back with a new novel, Children of Earth and Sky, set in a world inspired by the conflicts and dramas of Renaissance Europe. Against this tumultuous backdrop the lives of men and women unfold on the borderlands—where empires and faiths collide.

From the small coastal town of Senjan, notorious for its pirates, a young woman sets out to find vengeance for her lost family. That same spring, from the wealthy city-state of Seressa, famous for its canals and lagoon, come two very different people: a young artist traveling to the dangerous east to paint the grand khalif at his request—and possibly to do more—and a fiercely intelligent, angry woman, posing as a doctor’s wife, but sent by Seressa as a spy.

The trading ship that carries them is commanded by the accomplished younger son of a merchant family, ambivalent about the life he’s been born to live. And farther east a boy trains to become a soldier in the elite infantry of the khalif—to win glory in the war everyone knows is coming.

As these lives entwine, their fates—and those of many others—will hang in the balance, when the khalif sends out his massive army to take the great fortress that is the gateway to the western world…

GUY GAVRIEL KAY is the #1 internationally bestselling author of ten previous novels and an acclaimed collection of poetry, Beyond This Dark House.
Kay was born in Weyburn, Saskatchewan, and raised in Winnipeg. In the 1970's he was retained by the Estate of J.R.R. Tolkien to assist in the editorial construction of Tolkien's posthumously published The Silmarillion. He returned to Canada from Oxford to take a law degree at the University of Toronto and was called to the Bar in Ontario.

Kay became Principal Writer and Associate Producer for the CBC radio series, "The Scales of Justice", dramatizing major criminal trials in Canadian history. He also wrote several episodes when the series later moved to television. He has written social and political commentary for the National Post and the Globe and Mail and for The Guardian in England, and has spoken on a variety of topics at universities and conferences around the world.

In 1984, Kay's first novel, The Summer Tree, the first volume of The Fionavar Tapestry, was published to considerable acclaim in Canada, the United States and the United Kingdom, and then in a number of countries and languages. In 1990 Viking Canada's edition of his novel Tigana reached the national bestseller list, and his next book A Song for Arbonne debuted at #1 in Canada.

Translations now exceed twenty languages and Kay has toured and read on behalf of his publishers and at literary events in Canada, the United States, England, Poland, France, Russia, Croatia, Serbia, Mexico and Greece, among others, with his next international appearance being slated for June 2010 in Shanghai and Beijing. He has been nominated for and has won numerous literary awards including the World Fantasy Award and is the recipient of the International Goliardos Prize (presented in Mexico City) for his contributions to the literature of the fantastic.  Guy Gavriel Kay’s work has inspired artists and writers around the world to create original music, verse, and art.

Kay lives in Toronto with his wife and sons.