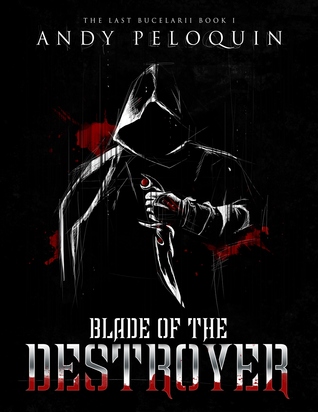 The Last Bucelarii (Book 1): Blade of the Destroyer

The Hunter of Voramis is the perfect assassin: ruthless, unrelenting, immortal. Yet he is haunted by lost memories, bonded to a cursed dagger that feeds him power yet denies him peace of mind. Within him rages an unquenchable need for blood and death.
When he accepts a contract to avenge the stolen innocence of a girl, the Hunter becomes the prey. The death of a seemingly random target sends him hurtling toward destruction, yet could his path also lead to the truth of his buried past?

"The fantasy world has a compelling new antihero…the Hunter will terrify and captivate you." - Eve A Floriste, author of Fresh Cut

"From the first words on the page this fantasy holds the reader spellbound even after the book is finished…his character is very well-defined even if his past is a mystery. Root for an assassin? Oh, yes, one must!" -- Carol Conley, for InDTale Magazine 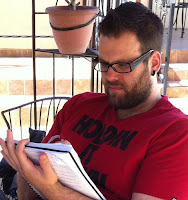 Andy Peloquin--a third culture kid to the core--has loved to read since before he could remember. Sherlock Holmes, the Phantom of the Opera, and Father Brown are just a few of the books that ensnared his imagination as a child.

When he discovered science fiction and fantasy through the pages of writers like Edgar Rice Burroughs, J.R.R Tolkien, and Orson Scott Card, he was immediately hooked and hasn't looked back since.

Andy's first attempt at writing produced In the Days: A Tale of the Forgotten Continent. He has learned from the mistakes he made and used the experience to produce Blade of the Destroyer, a book of which he is very proud.

Reading—and now writing—is his favorite escape, and it provides him an outlet for his innate creativity. He is an artist; words are his palette.

His website (http://www.andypeloquin.com) is a second home for him, a place where he can post his thoughts and feelings--along with reviews of books he finds laying around the internet.

He can also be found on his social media pages, such as:

Eyes the color of night watched Lord Damuria's body plunge to the forest floor. The wind seemed to hold the nobleman suspended in the air for a moment before slowly releasing his body to the grasping clutches of gravity.
The hard, dark face of the Hunter showed no sign of pity as the body landed with a loud thud at his feet.
It is no more than he deserves, he thought.
The Hunter had no idea why Lord Damuria deserved death, nor did he care. He had been paid, and that was all that mattered.
He felt no remorse as he watched the broken man fight for his last pitiful, agonizing breaths. Not given to mercy, the fear in Lord Damuria's eyes meant nothing.
Soot and mud stained the nobleman's robes, his bright crimson blood contrasting sharply with the white blond of his hair. Where Damuria's hands had once been, only stumps remained. The Hunter's broad-headed crossbow bolts had sliced through bone and tendon, severing the man's hands at the wrist. The bolts were buried deep in the stone of the cliff, still stained with Damuria's blood.
The nobleman struggled to speak, made difficult by the quarrel puncturing his lungs. The Hunter bent close to hear the whispered words.
"Do…it…you…bastard." Lord Damuria's eyes closed as he awaited the inevitable.
The Hunter moved with precision and speed, drawing the dagger from his belt and plunging it deep into the dying man's chest. The thrust snapped ribs and sliced through smooth heart muscle. Damuria's screams echoed in the silence of the forest, an eerie sound tinged with desperation and terror.
The screams of his victims always remained with him long after their deaths. They played over and over in his mind, accompanied by the vision of their dying faces.
Bright ruby light flared from the gem set in the hilt of the dagger, and power rushed through the blade. The Hunter gasped as the voice in his mind screamed its pleasure. The familiar pain flared along his back, but he was accustomed to it. This pain was the price he paid for the power.
This, he thought, reveling in the sensations flooding through him, this is why I do it.
A final shudder ran through the broken body before him, and the cries of agony faded into a gentle whisper. "Fucking…Hunter…" Damuria cursed with his dying breath.
Silence reigned in the forest, broken only by the sound of the wind whistling through the trees. After the thrill of the chase, the stillness hung like a weight on the Hunter's mind. A tremble ran through his calloused hands as he gripped the worn hilt of the knife embedded in his latest kill, his long, lean muscles bulging in his effort to wrench the blade free. The knife was caught on the dead man's ribs, and pulling it free required a surprising amount of effort, even with the Hunter's immense strength.
Blood glistened on the blade, and the Hunter watched it soak into the steel. The bright red light leaking from the gem slowly dimmed, and the stone became translucent and colorless once more.
The dagger has been sated. He no longer heard the insistent voice in his head urging him to kill. It will remain silent, for now.
The Hunter sheathed his blade and stooped to kneel over the lifeless form of his prey. Placing one hand on the man's head and the other on his now-silent heart, he bowed his head.
"May the Long Keeper take your body; your soul is forfeit," the Hunter intoned. His voice was rich and deep with a hint of gravel. A hard voice, reciting a final ritual for fallen prey. A ritual from a past he could no longer remember.
He stared down at the broken body lying at his feet.
This one was surprisingly difficult to track down.
Green blood now oozed from the dead man's severed wrists, staining the forest canopy a sickly color. The scent of poisoned flesh hung in the air—the effects of the venomous argam with which he coated the bolts, the Hunter knew.
A fit creature for the hunt. A sense of satisfaction flooded him. Another contract fulfilled.
He had killed all manner of men. Big men, little men, strong men, weak men. Cowards, and brave fools. Heroes, villains, rich men, beggars.


He was the Hunter, and all men were his prey.
Andy Peloquin Blade the Destroyer Feature