Giveaway: THE ART OF LANGUAGE INVENTION 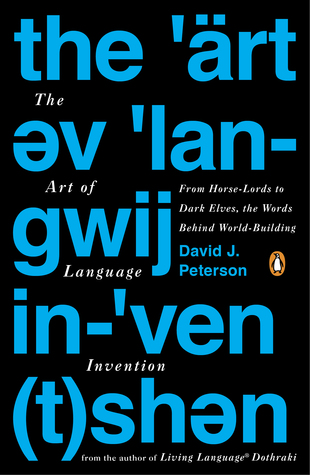 ABOUT THE ART OF LANGUAGE INVENTION:
In THE ART OF LANGUAGE INVENTION, master language creator David J. Peterson lays out a creative, highly accessible guide to language construction for science-fiction and fantasy fans, writers, game creators, and language lovers. Peterson begins with a brief history of constructed languages—also known as conlangs—from J.R.R. Tolkien’s Quenya and Sindarin to Star Trek’s Klingon to the thriving global community of language construction. Then, using examples from a variety of languages including his own conlangs, Peterson offers a captivating and lucid overview of language creation, providing a basic foundation of essential linguistic tools for inventing and evolving one’s own lexicon. Along the way, behind-the-scenes stories lift the curtain on how he built languages for television series and movies like Dothraki and High Valyrian for HBO’s Game of Thrones and Shiväisith for Marvel’s Thor: The Dark World, and an included phrasebook will start fans speaking Peterson’s conlangs.

An inside look at a fascinating culture and a perfect entry point into an art form as old as civilization, THE ART OF LANGUAGE INVENTION is a wild linguistic adventure that will have readers ready to rub shoulders with horse lords and dark elves and perhaps inspire them to create their own languages.

PRAISE FOR THE ART OF LANGUAGE INVENTION:
“A gateway to the rich and rigorous process of language invention and a course in linguistics unto itself.”
—Library Journal

“Equal parts fascinating, challenging, and geeky… Peterson writes with witty flair… Readers [will] learn more about linguistics than they ever learned in school.”
—Publishers Weekly

“David Peterson’s language work transformed our show, investing it with a sense of reality and history that would have been impossible without him. There’s nothing like the real thing, and David Peterson is it. This fascinating book will not only illuminate the task of language creation—it will make you look at your own language in a whole new way.”
—David Benioff and D.B. Weiss, co-creators of HBO’s Game of Thrones
“David J. Peterson’s THE ART OF LANGUAGE INVENTION accomplishes a minor miracle in taking a potentially arcane discipline and infusing it with life, humor and passion.  It makes a compelling and entertaining case for language creation as visual and aural poetry.  I cherish words, I love books about words and for me this is the best book about language since Stephen Fry’s The Ode Less Traveled.  And, best of all, there’s a phrasebook!”
—Kevin Murphy, co-creator and showrunner of Syfy’s Defiance

“If you want to know how someone makes up a language from the ground up, you'll find out how in this book—and the glory of it is that along the way you'll get the handiest introduction now in existence to what linguistics is. In fact, read this even if you DON’T feel like making up a language!”
—John McWhorter, author of The Language Hoax

“Accessible, entertaining, and thorough, Peterson has created an invaluable resource for authors, dedicated fans, and casual enthusiasts. This is the book I wish I'd had when I started writing.”
—Leigh Bardugo, New York Times bestselling author of Shadow and Bone
“This book not only lucidly ushers language invention into its own as an art form, it's also an excellent introduction to linguistics.”
—Arika Okrent, author of In the Land of Invented Languages

ABOUT THE AUTHOR:
DAVID J. PETERSON began creating languages in 2000, received his MA in Linguistics from the University of California, San Diego, in 2005, and cofounded the Language Creation Society in 2007. He has created languages for HBO’s Game of Thrones, Syfy’s Defiance and Dominion, the CW’s Star-Crossed, and Thor: The Dark World. He is also the author of Living Language Dothraki.

Thanks to Viking/Penguin, I have a copy to give away to a lucky reader. You must be at least 13 years old to enter. This giveaway is open to US addresses only. Please read our entire giveaway policy before entering.