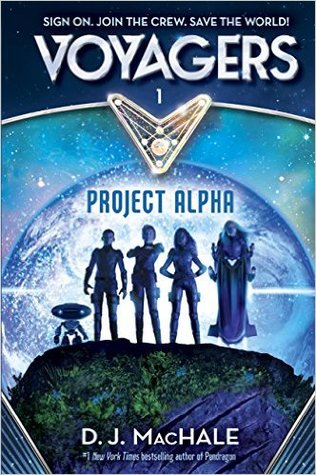 The action is on the page, on your device, and out of this world! This multiplatform series is part sci-fi, part eco-mystery, all action-adventure. And you don't have long to wait -- 6 books are coming all in one year! Earth is about to go dark. Without a new power source, life as we know it will be toast. A global competition is under way to determine who will join the secret mission that might just save us all. Project Alpha is a contest of physical challenges, mental puzzles, and political alliances. The battle is fierce, and only four kids will make the cut. The Voyagers will journey to the far reaches of space, collecting unique elements and facing unbelievable dangers. The future of our planet is in the hands of four kids. Sure, they’ll be the best in the world . . . but can they save the world?

1. How did you get involved in this project?

That’s a good question.  I’m not entirely sure!  The way I understand it is that the editor at Penguin Random House, Michelle Nagler, liked my books and suggested me to Pat Carman who is the mastermind behind VOYAGERS.  I had lunch with Pat in Los Angeles and found that he was a really great guy with a fantastic vision, and signed on!

2. Project Alpha is the first out of six books in the Voyagers series. Did you feel any pressure when writing this book?

Ha!  Not at first.  I actually asked to write the first book thinking I wouldn’t have to follow the style or stories of writers that came before me.  I was right on that count, but it also meant that since it was all just beginning I had to be ready to make lots of changes and additions, based on the ideas that the whole VOYAGERS team was coming up with.  It also meant that I had to write fast because the next writers needed to know what I had written before they could get started on their own books.  But that was okay.  I was expecting that.  The whole process was fun and I felt no pressure…until I saw an advanced reader copy.  Looking at that book, there was no mention of all the people who had input on VOYAGERS.  It just had my name on the cover.  Suddenly I felt very alone with a massive weight of responsibility on my shoulders.  I’m glad I didn’t feel that until it was too late to worry about it!

3. Who are you science fiction influences?

I actually haven’t read that much pure sci-fi.  In going to Comic Con and other conventions, I’ve learned that sci-fi readers make up a very strong and specific subset of readers.  They take it very seriously.  I’ve read some Vonnegut and Bradbury, but I don’t consider myself a hardcore sci-fi guy. I just like great adventures...no matter where they take place.  So most of my sci-fi influences come from movies and TV.  Of course Star Trek is on top of the list.  I’m old enough to have watched the original show when it was first run.  Same thing with Lost in Space.  Those shows now seem a little bit cheesy, but back then…wow!  When I was a kid they also ran those great old black & white sci-fi serials on TV like:  Buck Rogers and Flash Gordon.  I wanted a flying suit like Commando Cody!  So I guess my love of sci-fi comes leans more to the excitement and adventure of space travel, as opposed to the more philosophical themes that appeal to the true sci-fi aficionados.

4. Do you have a favorite character in this book?

Of course I love them all, but I’m a bit partial to Ravi.  That’s only because I like writing “wise guy” lines.  Ravi is the kind of guy who says what everybody else is thinking, no matter whose toes he may be stepping on.  I love characters who can cut through all the drama and offer an insightful comment…that usually happens to be funny.

5. The kids in Project Alpha are in search of a new energy source. Do you have some tips for our young readers out there on how they can conserve energy?

The need to conserve energy isn’t something new.  I was aware of it as a kid way back in the 60’s.  For whatever reason, my school ingrained in me the need to respect our planet and to understand that our natural resources aren’t limitless.  I have several things that I do that are incredibly simple and have become everyday habits that I don’t even think about anymore.  For example:  I turn out the lights when I leave a room.  Every time.  I don’t even think about it.  A few years back when working on a TV show in Hawaii, my family lived in a rented house.  After a few months we got a call from the owners because they didn’t understand why the electric bill was much lower for us than when they were there.  The answer was simple:  we turned out the lights.  In everyone’s house there are dozens of “energy vampires” that use small amounts of energy, but they’re using it constantly.  Things like computer monitors, appliances and games.  When you’re not using them, turn them off or unplug them.  Make sure there are no “ready” lights burning.  Just doing those few small things will help save lots of energy.

My thanks to D.J. MacHale for answering my questions. To find out more about him be sure to visit: http://djmachalebooks.com/. Voyagers: Project Alpha is in stores now. Be sure to come back later this week to check out my review of it.
D.J. MacHale Interview Project Alpha Voyagers