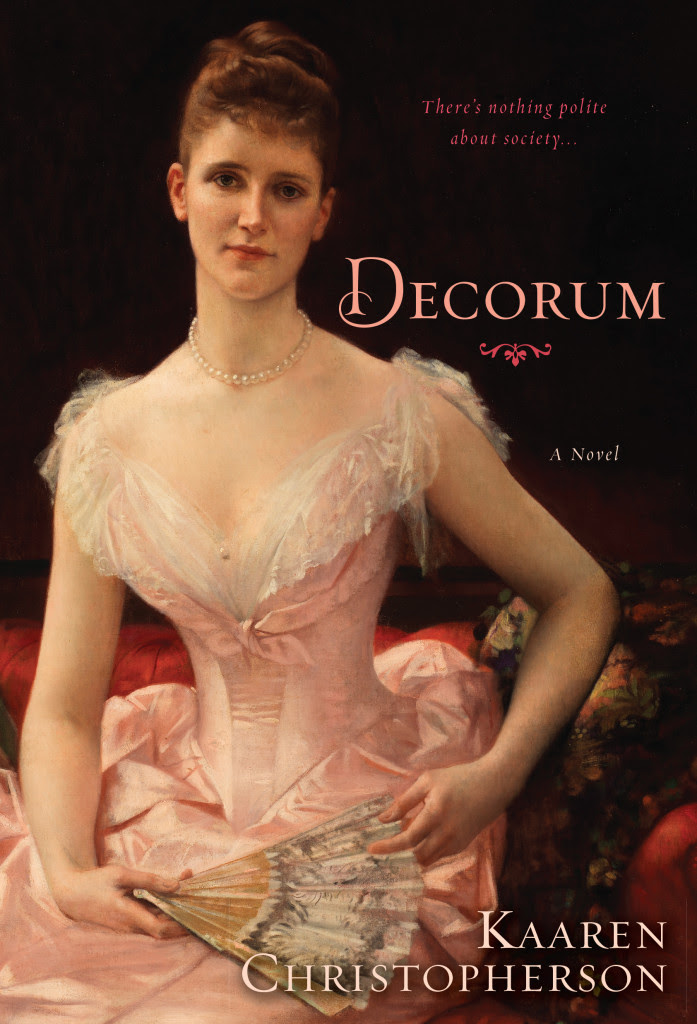 Decorum: A Novel
by Kaaren Christopherson

Kaaren Christopherson's brilliantly observed novel captures the glamour and grit of one of the world's most dazzling cities during one of its most tumultuous eras--as seen through the eyes of a singularly captivating heroine...

In 1890s New York, beautiful, wealthy Francesca Lund is an intriguing prospect for worthy suitors and fortune hunters alike. Recently orphaned, she copes by working with the poor in the city's settlement movement. But a young woman of means can't shun society for long, and Francesca's long-standing acquaintance with dashing Edmund Tracey eventually leads to engagement. Yet her sheltered upbringing doesn't blind her to the indiscretions of the well-to-do...

Among the fashionable circle that gathers around her there are mistresses, scandals, and gentlemen of ruthless ambition. And there is Connor O'Casey--an entirely new kind of New Yorker. A self-made millionaire of Irish stock, Connor wants more than riches. He wants to create a legacy in the form of a luxury Madison Avenue hotel--and he wants Francesca by his side as he does it. In a quest that will take her from impeccable Manhattan salons to the wild Canadian Rockies, Francesca must choose not only between two vastly different men, but between convention and her own emerging self-reliance.

A gentleman should not be presented to a lady without her permission being previously asked and granted. This formality is not necessary between men alone; but, still, you should not present any one, even at his own request, to another, unless you are quite well assured that the acquaintance will be agreeable to the latter.

If you wish to avoid the company of any one that has been properly introduced, satisfy your own mind that your reasons are correct; and then let no inducement cause you to shrink from treating him with respect, at the same time shunning his company. No gentleman will thus be able either to blame or mistake you.

The mode in which the avowal of love should be made, must of course, depend upon circumstances. It would be impossible to indicate the style in which the matter should be told... Let it, however, be taken as a rule that an interview is best; but let it be remembered that all rules have exceptions...

I don't know why I love the 1800's so much, but I do. There's also something so stifling about that time period as well. Way too many rules for me. Particularly if you're a woman. In Decorum, the characters of the novel are under the thumb of society. Some are trying to find their way. Others are trying to make it the best they can in the circumstances they are dealt.

Francesca is an heiress with an independent spirit; Conner is a wealthy up and coming hotel tycoon; Edmund is a handsome, charming, and shady character, and Blanche is a opportunist. These fascinating characters and their relationships are what drive this book. Kaaren Christopherson does a fantastic job of weaving a tale that had me enraptured.

This book wasn't exactly what I expected when I started reading, but it was so much more. Francesca's naivete and Edmund's cunning had me on the edge of my seat. I couldn't wait to find out the whole background story with Edmund. Blanche also was a formidable character to be dealt with. It was like a soap opera, but only like a really good soap opera.

I really enjoyed reading this book, and I look forward to Kaaren Christopherson's next book!

“Christopherson provides the reader with a fully-realized world of brazen and aspiring women, ambitious men and strict expectations regarding how to conduct one's private and/or social life. The characters are so beautifully drawn that I felt like I could start casting the mini-series the minute I put the book down. And, this book would make a wonderful TV series with settings ranging from early New York City to the Canadian Rockies. …I loved every minute.” - Nancy, Goodreads reviewer

“…the novel is remarkable in its similarities to the work of Edith Wharton. The reader feels drawn into a world of glamour, glitz, and supreme hypocrisy. Everything is permissible as long as one does not get caught. It is a drama of manners and the stakes are high—one misstep could mean social oblivion. … This novel will appeal to a wide range of readers, particularly those who enjoy period novels such as Age of Innocence and The Portrait of a Lady." - The Historical Novel Society

“New York, 1890, and the glitz and glamor of the time and setting, are the backdrop for this novel about a young heiress who suddenly finds herself alone in the world. I loved how each chapter began with a rule of etiquette based upon the societal norms of the time. The story gave me a glimpse of what it would have been like to live among the wealthiest and most prominent citizens. Of course, all is not perfect, for the heroine must maneuver her way through treachery, greed, and scandal to find which of the two men in her life is her true love. I thoroughly enjoyed how the characters interacted, and how authentic they felt to me. Lots of wonderfully rich descriptions of places and gowns really brought the era to life. … I definitely recommend this book to anyone who enjoys New York in the Gilded Age. A good historical read!” - Mirella Patzer, Historical Novel Review

”A fantastically engaging book with everything you need for a really good read, probably best summed up as the American Downton Abbey meets Jane Austen. It starts a little slowly, but when it gets going, it really is difficult to put down.

The plot and the various subplots are fascinating, with so many twists and turns, it never stops weaving a new thread. You constantly feel that the story will be coming to an end, but then there is more... and more... and more.

The characters are well-developed, credible and, though not always likeable, possessing some magical quality that makes us feel like we know them so well. The central character manages to make herself someone to admire and someone we almost want to dismiss at the same time, whilst she metamorphoses throughout the novel, constantly changing on her journey of discovery. She presents a sense of strength and courage as she is faced with the most heart-wrenching and, often, downright embarrassing situations, yet she wins through in the end, despite overwhelming odds against a woman at this time.

Throughout the novel, there is a quality that makes it feel like a movie—and this would make an excellent movie, without a doubt. The pace is just right and it keeps you gripped until the end. Excellently written and a thoroughly enjoyable read.” - Annemarie Macken, Goodreads review

"In this remarkable first novel, Christopherson takes us back to 1890s New York -- to tell a tale so pitch perfect it hurts. Bridging the divide between historical fiction and literary fiction, the story of the rising immigrant Connor and the unlikely pairing with orphaned socialite/settlement house worker Francesca is beset with conflict from her devious fiance Tracy, Connor's lover the scandalous Blanche and Francesca's meddling guardians the Jeromes. Some of the most gorgeous scenes are set in an art warehouse examining paintings that have just arrived from Paris, a hat shop, a delightful tea house and of course, tangled in the bedsheets! Between murder, trials, and lies, this tale takes us to Argentina and Louisiana, Ireland and Chicago, the lower east side to the upper west side and finally to a real resort in Banff Canada where our unlikely pair will finally get a chance. Or will they?" - Booksmart, Amazon review 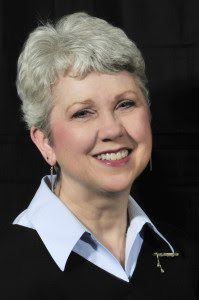 Kaaren Christopherson is the author of Decorum—a novel about Gilded Age New York—that began taking form in 1999 during a course on writing historical fiction. From that moment, Connor O’Casey (who had been rattling around in her brain for months) finally appeared one night and said, “All right, woman. Here I am. What are you going to do about my story?” So she began to put his words on paper, and he hasn’t kept quiet since. Soon Francesca, Blanche, Tracey, Vinnie, and the rest of the characters began arguing, gossiping, loving, and forming themselves into Kaaren’s first novel.

Kaaren has had a professional career writing and editing for over 30 years and is a senior editor for an international development nonprofit organization in Washington, DC.

She has written fiction since her school days, story poems, children’s books, historical fiction, and time travel, and continues to be active in writer’s groups and writing workshops. In addition to her career as a writer, Kaaren was the owner of a decorative painting business. She loves to travel and prowl through historical sites, galleries, and museums. She is active in several churches in DC and in her local Northern Virginia community, where she shares her home with feline brothers, Archie and Sammy.

A Michigan native, Kaaren received her BA in history and art and her MA in educational administration from Central Michigan University in Mt. Pleasant, Michigan.

Monday, August 24
Review at Bookish
Spotlight at The Lit Bitch

Thursday, August 27
Spotlight at Passages to the Past

Friday, September 4
Review & Giveaway at View From the Birdhouse
Spotlight at The Never-Ending Book

Wednesday, September 9
Review at Queen of All She Reads
Spotlight at Please Pass the Books

Friday, September 11
Interview & Giveaway at The Bookdragon
Spotlight at So Many Books, So Little Time

Tuesday, September 15
Review at With Her Nose Stuck in a Book
Guest Post at Books and Benches

Friday, September 18
Review at Jorie Loves a Story
Review at Just One More Chapter
Review at To Read, or Not to Read