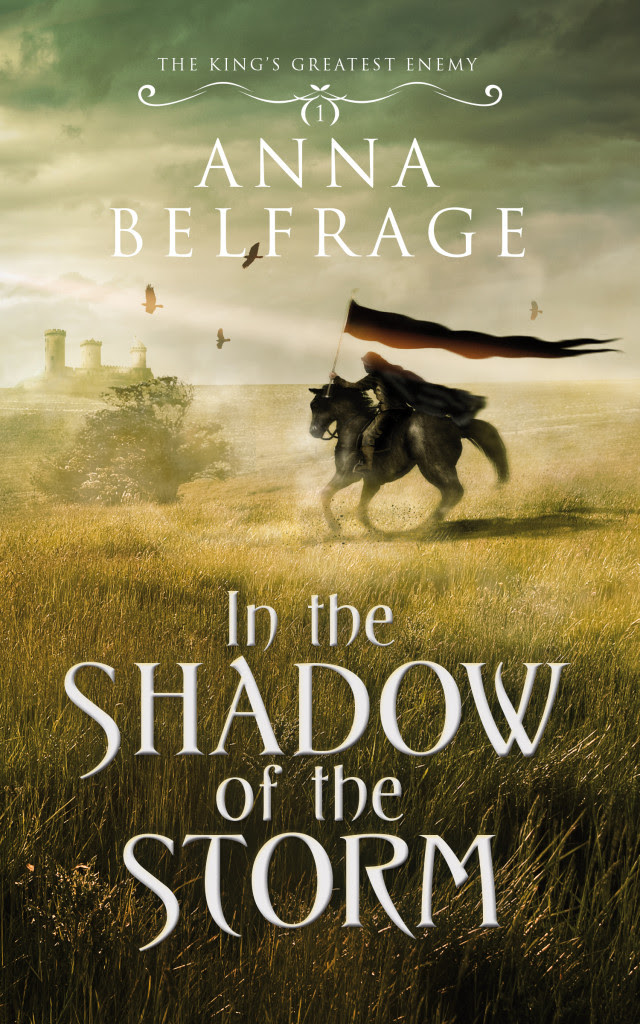 In the Shadow of the Storm (The King's Greatest Enemy, Book One)
by Anna Belfrage

Adam de Guirande owes his lord, Sir Roger Mortimer, much more than loyalty. He owes Sir Roger for his life and all his worldly good, he owes him for his beautiful wife – even if Kit is not quite the woman Sir Roger thinks she is. So when Sir Roger rises in rebellion against the king, Adam has no choice but to ride with him – no matter what the ultimate cost may be.

England in 1321 is a confusing place. Edward II has been forced by his barons to exile his favourite, Hugh Despenser. The barons, led by the powerful Thomas of Lancaster, Roger Mortimer and Humphrey de Bohun, have reasons to believe they have finally tamed the king. But Edward is not about to take things lying down, and fate is a fickle mistress, favouring first one, then the other.

Adam fears his lord has over-reached, but at present Adam has other matters to concern him, first and foremost his new wife, Katherine de Monmouth. His bride comes surrounded by rumours concerning her and the baron, and he hates it when his brother snickers and whispers of used goods.

Kit de Courcy has the misfortune of being a perfect double of Katherine de Monmouth – which is why she finds herself coerced into wedding a man under a false name. What will Adam do when he finds out he has been duped?

Domestic matters become irrelevant when the king sets out to punish his rebellious barons. The Welsh Marches explode into war, and soon Sir Roger and his men are fighting for their very lives. When hope splutters and dies, when death seems inevitable, it falls to Kit to save her man – if she can.

In the Shadow of the Storm is the first in Anna Belfrage’s new series, The King’s Greatest Enemy, the story of a man torn apart by his loyalties to his baron, his king, and his wife.

Where do they come from?

Sometimes, people ask me where I get my ideas from.
“They just come to me,” I reply. Of course, this is a simplification: in general, something has snagged my attention, and while I go on with the humdrum of everyday life, my subconscious is happily beavering away, building a veritable mountain out of that little fact that first had me hooked.

Once my subconscious is happy with this initial outline it decides it is time to poke me into action. My subconscious – or my inner muse, if you will – is a somewhat intimidating female presence. I picture her as tall, dark hair swept up in a magnificent hairdo from which curls spill every which way (at times giving her an eerie likeness to the Medusa) and dressed in skirts so long and wide they swirl around her as she moves. She is impatient, has a touch of OCD, and will gladly rip my sleep to pieces if that is what it takes to get my attention.

She is also devious. This is probably why she very often starts by introducing Mr Lead to me. Seeing as she’s my subconscious, she has a pretty good idea what sort of men I fall for – I like men with convictions, strong enough to shoulder whatever burdens come their way, brave enough to admit that sometimes they are scared and vulnerable. Plus it helps if they’re easy on the eye, and Ms Subconscious is good at having my dreams populated with one handsome man after the other. Actually, that is incorrect: Ms Subconscious has a monogamist streak, so once she’s created Mr Lead, she bombards me with images of him – sleeping, laughing, fighting, riding, taking a bath (naked, of course), comforting his woman, supporting his lord.

Adam de Guirande started off as one of those dreams. Tall, fair – a throwback on his Saxon ancestors rather than his Norman father – he popped up one night, his eyes resting on a shadowy young woman, as yet no more than a distant shape. His future bride, he explained with a crooked smile. Yet another favour from his lord, Baron Mortimer, this bride who came with substantial dowry – and a tarnished reputation.
“One should never believe in rumours,” I told him sternly, and the woman smiled at me, allowing me a glimpse of hair the colour of conkers in autumn, eyes as blue as cornflowers. Aha! I was on to something! The prospective bride was not quite what Adam expected her to be…
“Of course not,” Ms Subconscious muttered. “What would be the fun in that?”

From that rather vague beginning, In the Shadow of the Storm began to take shape. Adam de Guirande is a man sworn to serve his lord, willing to die for Roger Mortimer if that should be necessary. So far, his life has been relatively uncomplicated: Lord Roger has been a loyal baron to King Edward II, so serving him has been serving the king. But since some months back, things have changed, Mortimer heading the rebellion that forces the king to exile his favourites. And now, the king intends to strike back… Not good, as per Adam.

Neither is he entirely happy with this proposed marriage – but Lord Roger insists it must go forward, and to Adam’s surprise he finds himself developing feelings for his wife. Such feelings increase his vulnerability: where before he had little to lose but his own life, now there is a woman he has sworn to protect – his wife, Kit. Except of course, that woman is not who she says she is, and once Adam finds out just who she is, things go really wild and crazy as he tries to sort out his feelings from his anger.

“Right,” Ms Subconscious said when we’d gotten this far. “I’ll turn it over to you now, okay?” And just like that, she faded elegantly into the background, leaving me to sort out a love story set against a complicated political background. Fortunately, I had done my research. Come to think of it, I know exactly what it was that triggered Ms Subconscious to begin with: it was the story of Roger Mortimer as such, baron turned rebel, turned escaped prisoner, turned invader, turned regent, turned dictator, turned…One can see where she was coming from: Mortimer’s life reads like a Hollywood adventure, complete with a passionate love affair and a hunger for power. And thanks to Ms Subconscious, Adam de Guirande will be riding side by side with Mortimer, right up to the bitter end.

I cannot promise you an easy journey – life rarely is – but I can assure you Adam and his Kit will have more than their share of adventures as they gallop along in the wake of Mortimer’s fiery trail through history.
“Told you,” Ms Subconscious says, adjusting her purple (Purple? Seriously?) skirts. “Lucky you to have me living in your head. What would you do without me?”


Sleep better? But I don’t say that out loud. Ms Subconscious is a prickly character, and besides, she’s right: what on earth would I do without her? 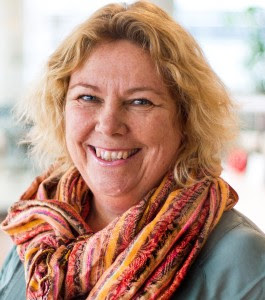 Had Anna been allowed to choose, she’d have become a professional time-traveller. As such a profession does as yet not exists, she settled for second best and became a financial professional with two absorbing interests, namely history and writing. These days, Anna combines an exciting day-job with a large family and her writing endeavours.

When Anna fell in love with her future husband, she got Scotland as an extra, not because her husband is Scottish or has a predilection for kilts, but because his family fled Scotland due to religious persecution in the 17th century – and were related to the Stuarts. For a history buff like Anna, these little details made Future Husband all the more desirable, and sparked a permanent interest in the Scottish Covenanters, which is how Matthew Graham, protagonist of the acclaimed The Graham Saga, began to take shape.

Set in 17th century Scotland and Virginia/Maryland, the series tells the story of Matthew and Alex, two people who should never have met – not when she was born three hundred years after him. With this heady blend of romance, adventure, high drama and historical accuracy, Anna hopes to entertain and captivate, and is more than thrilled when readers tell her just how much they love her books and her characters.

Presently, Anna is hard at work with her next project, a series set in the 1320s featuring Adam de Guirande, his wife Kit, and their adventures and misfortunes in connection with Roger Mortimer’s rise to power. The King’s Greatest Enemy is a series where passion and drama play out against a complex political situation, where today’s traitor may be tomorrow’s hero, and the Wheel of Life never stops rolling.

The first installment in the Adam and Kit story, In the Shadow of the Storm, will be published in the autumn of 2015.

Other than on her website, www.annabelfrage.com, Anna can mostly be found on her blog, http://annabelfrage.wordpress.com – unless, of course, she is submerged in writing her next novel.

Tuesday, December 1
Review at I'm Shelfish
Review at Let Them Read Books
Spotlight at Passages to the Past

Thursday, December 3
Review at So Many Books, So Little Time

Monday, December 7
Review at One Book Shy of a Full Shelf

Tuesday, December 8
Review at Book Nerd
Guest Post at One Book Shy of a Full Shelf

Monday, December 14
Review at Unshelfish
Review at CelticLady's Reviews
Guest Post at To Read, Or Not to Read

Tuesday, December 15
Review at A Chick Who Reads
Review at Historical Fiction Notebook

Thursday, December 17
Review at Just One More Chapter
Review at Oh, For the Hook of a Book

Monday, December 21
Review at Puddletown Reviews
Review at With Her Nose Stuck in a Book

Anna Belfrage Guest Post In the Shadow of the Storm