The Further Adventures of Ebeneezer Scrooge 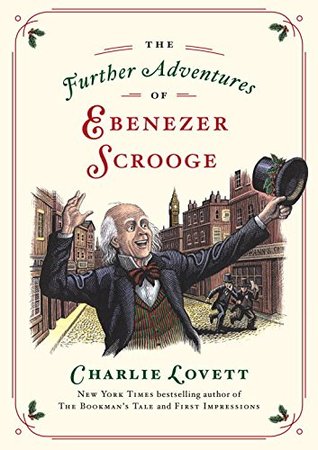 On a hot summer day some twenty years after he was famously converted to kindness, Ebenezer Scrooge still roams the streets of London, spreading Christmas cheer, much to the annoyance of his creditors, nephew, and his employee Bob Cratchit. However, when Scrooge decides to help his old friend and former partner Jacob Marley, as well as other inhabitants of the city, he will need the assistance of the very people he’s annoyed. He’ll also have to call on the three ghosts that visited him two decades earlier. By the time they’re done, they’ve convinced everyone to celebrate Christmas all year long by opening their wallets, arms, and hearts to those around them.

Written in uncannily Dickensian prose, Charlie Lovett’s The Further Adventures of Ebenezer Scrooge is both a loving and winking tribute to the Victorian classic, perfect for readers of A Christmas Carol and other timeless holiday tales.

Charlie Lovett has a way of delving into literature and shaking things up a bit. He did it first with Shakespeare and The Bookman's Tale and then again with Jane Austen and First Impressions. Now he does it with once more with Charles Dickens and The Further Adventures of Ebeneezer Scrooge. In The Bookman's Tale and First Impressions Lovett combines a modern-day story with a mysterious story involving the authors. The Further Adventures of Ebeneezer Scrooge is without the modern-day story. And as the title suggests, it's what happens to Scrooge after that fateful Christmas day.

This story does not take place at Christmas, but during the hot summer months. Ebeneezer is true to his word and keeps Christmas in his heart. So much so that during summer he's still wishing people a merry Christmas. Which makes him look and sound like a mental patient. Even those he's closest to--his nephew and his clerk turned partner--look at him like he might be going to the insane asylum any day. Not only that, his departed friend, Jacob Marley, still has many, many chains that cling to him. Scrooge vows to help Jacob anyway he can and so he once again enlists the help of the three spirits that helped him so long ago to help the people dearest to him before it's too late.

I've read both The Bookman's Tale and First Impressions and enjoyed them immensely, so I was thrilled to see what he'd do with Dickens' A Christmas Carol. While Dickens doesn't make an appearance in this novel, his spirit seams to dwell in the background, between the sentences and punctuation. Much like A Christmas Carol, The Further Adventures of Ebeneezer Scrooge is a quick but enticing read. And while this may appear to be a book to read only during the holidays, I believe it could be read during any season really. If you have an hour or two to spare during this holiday season, I suggest you give this book a try. It's also available on audio, narrated by Tim Gerard Reynolds, which is perfect to listen to while you're wrapping the last few gifts or getting dinner ready. I can't wait to see what Lovett's next book will be.

Also, if you like audio books, Patrick Stewart narrates A Christmas Carol and it's fantastic!  There are also versions narrated by Tim Curry, Jim Dale, and Orson Welles that promise to be just as good.   However, if you're more into watching it on television than reading, you should check out The Muppet Christmas Carol. It's surprisingly close to the original story. and lots of fun to watch!