TEN WAYS TO REMAKE YOUR LIFE

Life is a journey in more ways than one. The path doesn’t always go according to plan. What if—through no fault of your own—you had to remake your life from scratch and change your goals, expectations, and focus? That’s exactly what happens to the hero and heroine (Ryan and Jenna) in REMAKING RYAN.

Here’s how they went about remaking their lives in ten steps:

Number One: To remake their lives, they must have their worlds knocked out from under them with no alternative plans for the future.
If you’re a rich and famous football player, this involves a painful career-ending injury.
If you’re the pregnant wife of a military pilot, this involves learning your husband is having multiple affairs and at least one of his girlfriends is also knocked up. And then the pilot is killed in action leaving you with an emotional stew of anger, humiliation, and righteous indignation. On top of all that, you lose your job and apartment.

Number four: Get reacquainted with someone who is both annoying enough and appealing enough to distract you from your problems.
Ryan is attracted to Jenna the moment she shows up in his hospital room, but she’s the most untrusting woman he’s ever met.
Jenna thinks all men are bottom-feeders in the sea of life, but her association with Ryan has her reconsidering that opinion.

Number five: Delay again.
Neither one of them are ready to admit their lives would improve with the inclusion of the other. For various reasons, they put their problems on hold and agree to take a road trip together, enforcing proximity, revealing good and bad character traits, and learning way more about one another then they ever wanted to know.

Number six: Start to have feelings for your annoying, yet appealing traveling companion.
Well, of course. All that proximity results in glimpses of body parts and reawakened desires.

Number seven: Revisit the dreams and goals of your childhood.
Ryan wanted to be a fireman, a policeman, or Batman—for the cool means of transportation. He turned to football when he exhibited superior athletic talent.
Jenna wanted to be the next Picasso, but turned to art history when her lack of artistic ability became apparent.

Number nine: Fall in love.
Ryan could probably have any woman he wants, but he wants Jenna.
Jenna must make a giant leap of faith and trust the one man who is willing to risk
everything for her.

Number ten: Pursue your lifelong dreams and the love of your life.
Don’t settle for less.

Opposites united in their disenchantment with life are pushed
together in a cross-country drive where they discover that sometimes the long
way home is the only way to go in Remaking Ryan by Jacie
Floyd. 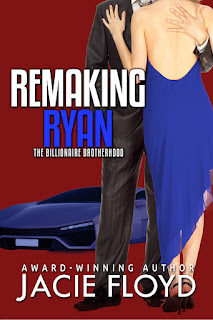 In Book Three of the Billionaire Brotherhood, Ryan Eastham
appears to have it all—fame, fortune, and legendary good looks—but injury has ended his high-profile professional football career and he’s at loose ends. After years of living, breathing, and training for football, he’s searching for something meaningful to do with his future. He expects nothing but boredom from
the on-air sports announcer job he’s been offered, and his so-called love life is more tabloid fiction than fact.

Due to the shattering betrayal of her late husband, Jenna McCall is wary of men and their meaningless promises. Isolating herself from friends and family while she reexamines her goals and dreams, her baby daughter is her sole focus. Ryan’s unscheduled intrusion into her life leaves her irritated, edgy, and a little intrigued.

Family commitments throw this pair together as reluctant companions on a cross-country drive from Massachusetts to Missouri. Despite a wrong turn, stolen car, and fussy baby, they find unexpected pleasure in one another’s company. Amid wedding chaos and intense family drama in St. Louis,
they each proceed with plans to start new careers in different parts of the country, but their attraction continues to build. When it’s time to say good-bye, Ryan challenges Jenna to remake their lives and plan a future together instead.

Find out more at: Goodreads | Amazon

“Zoey? Baby?” Ryan mumbled, snagging Jenna’s wrist and pulling her forward. Caught off-guard, she found herself breast to chest with an implacable male form for the first time in eleven months, two weeks, and three days. Not that she was counting. Before she could spring away, his other hand burrowed into the hair at the nape of her neck and turned her face toward his. It happened so swiftly that she didn’t—couldn’t—react fast enough to evade the maneuver. Unwelcome goose bumps quickstepped down her spine. Her first thought was that he smelled male, woodsy, and slightly medicinal—like the great outdoors infused with a hint of anesthesia. But then, along with the shock of having her chest pressed against his, came the panicky sense of suffocation.

His breath mingled with hers. Sweat beaded her forehead. For a second, she couldn’t breathe. Her eyes crossed at the nearness of his mouth, just inches away. Before his lips touched hers, she pinched his nose between her fingers
and twisted. Hard.

Jerking back, he somehow clipped her mouth with his chin. Jenna’s incisor sliced into her lip. She yelped and tried to escape his grip, but his fingers remained firmly clasped around her wrist. His
arm muscles bunched with all the expected strength of a professional athlete. If he chose to, he could sail her across the room like a Frisbee. Luckily, he didn’t. Squinting at her, confusion clouded the depths of his silvery gray eyes until the puzzlement cleared. He nodded in recognition.

“Jenna.” The word held a whisper of accusation, low and pulsing. He rubbed his chin. “That was uncalled for.”

“No kidding.” She wiped her mouth with the back of her hand. “Dang, I think I’m bleeding.”

“Here,” he said, lifting a corner of the sheet to dab her lip.

“No, thanks.” She held up her hand to block the gesture, plucked tissues from the box on the bedside table, and passed him one. “You don’t have any infectious diseases, do you? STDs?
Anything?”

“Clean as a rookie at his first training camp.”

“Good, ‘cause you’re bleeding, too. I hope we haven’t mixed and mingled bodily fluids. Blot your chin,” she instructed, but sat on the edge of the bed and did it for him. “Didn’t anyone teach you to look before you kiss?”

“Must’ve missed that lesson when my dad was teaching me the exact opposite.” Covering his mouth with his free hand, he yawned so wide his jaw cracked. “Why are you here? Someone send you on a little guilt trip?” 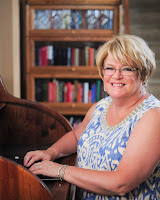 Like most writers, I’ve always been an avid reader. I always knew I wanted to write, too, but I kept that tidbit to myself for a very long
time. What does a reader who secretly wants to write do? She works in a
library. My very first job, and maybe my favorite, was in my hometown public library. I loved everything about the grand old building and was fascinated by the people who came and went every day. But mostly, I loved the books. Seeing them, handling them, checking them in and out, shelving them, and, of course, reading them. To have access to books that contained so much knowledge, history, and tradition was a pleasure that never grew old.

In my spare time through the next few years, I continued reading and began learning how to write. I accumulated stacks of completed manuscripts and an increasing determination to get them published. Happily, my sixth full-length novel has just been released. I would describe my books as fresh, flirty, and fun contemporaries about strong women and men who deal with relatable situations in familiar settings. They’re also emotionally rewarding with a liberal helping of humor, because, really, what point is there to life without laughter?

After living my childhood and adult life in a variety of Midwestern cities, I was always an island girl at heart, yearning for white sands, perpetual sunshine, and crystal blue waters. This past year I turned
that dream into reality by abandoning my snow shovel along with my day job and moving to Florida to write full-time. The view from my lanai is great, the wildlife is interesting, and my handsome and heroic husband handles all of my IT issues and regularly prods me to interact with actual living, breathing people, not just the ones I invent and put on the page.

Follow the blog tour from January 11th to the 22nd! One grand prize winner will receive a $20 Amazon Gift Card and the runner-up prize are three (3) eBooks from author’s backlist (winner’s choice).


The Power of Three Readers