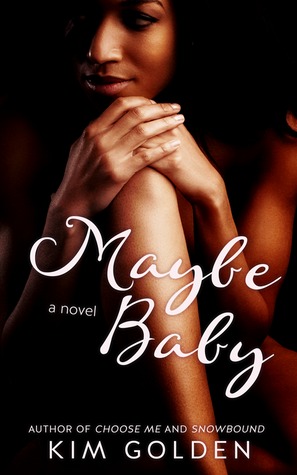 When I first wrote about Laney in Maybe Baby, I had no idea that she would demand more stories. I never intended for Maybe Baby to become a series. I only knew I wanted to tell the story of a black woman from the States who--like me--happened to live in Scandinavia and who happened to fall in love. But, unlike me, Laney wasn't in love with the man she was with.  Laney wanted something more. She thought she wanted a baby. What she really wanted was to find the person who was meant to complete her. And this journey is the story I tell in Maybe Baby. How she meets and falls in love with Mads, who is also searching and feeling just as lost as Laney.

Over the course of three books (Maybe Baby, Maybe Tonight and Maybe Forever), I've charted their love story. Not everyone appreciates it. Some people are put off by the infidelity angle and it prevents them from seeing what is the heart of the story: two people searching for and finding love, just maybe not in the best of ways. Infidelity ends up figuring into a lot of my writing. Not because I condone it. It's more that I am interested in what makes people cheat. And how they deal with the consequences of it.

Once I'd finished tweaking Maybe Baby, I received advice that it would be easier to sell if Laney were white or if I changed the setting from Scandinavia to somewhere more palatable for American tastes like Paris or London or even New York. But that wasn't what I wanted. And really, when I began writing Maybe Baby, I wrote it more for me than anyone else. I didn't want to read another story set in New York or London or Paris. I wanted to write about looking for love in Scandinavia--especially since I live here and know Stockholm, Sweden and Copenhagen, Denmark much better than I do Paris or New York. Someone even suggested I change Laney to a white woman because--"you'll sell more books that way."  But I didn't want to tell a random white woman's story. And Laney came to me as a black woman, not a white woman.  I wanted to tell her story—the story of a black woman living in Europe and trying to find that someone who would make her feel like she'd come home.

So...I won't change the sort of characters I write about just to please people who don't want to read about black women falling in love. And I won't change the settings just because some people have no clue where Scandinavia is or think that the only thing capable of being set there is a murder mystery. I found love in Scandinavia...I found my guy who made me feel like I'd come home. And I think there are more love stories to come that have a connection with my Nordic home...a few more stories about Laney, her feisty cousin Eddy...maybe even Laney's daughters once they're old enough. And I think I'll keep writing about black women in love.

At the end of the day...it's what we all want—love.

If you’d like to read love stories outside of your comfort zones, check out the selection of books, including Maybe Baby, on the When Black Women Fall promo tour at http://whenblackwomenfall.com!


About the Book:
Imagine finding out you could never have a baby with the man you love…
Expat American Laney Halliwell finds out the hard way when Niklas tells her he had a vasectomy before they met and isn’t interested in reversing it. Why should he? They’ve got his kids from his first marriage and an enviable life in Stockholm.
What if you fell in love in the most unexpected way…?
But Laney wants more. So when a friend suggests she look into an alternative sperm bank in Copenhagen to find a potential father for her baby, things don’t go exactly as planned. Especially when Laney meets Mads and finds herself falling in love.