Review: In the Heart of the Sea 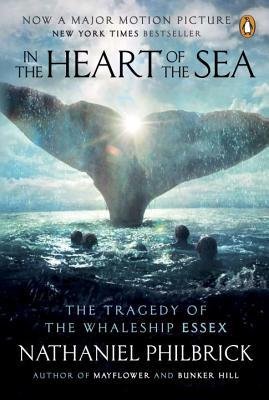 In 1820, the whaleship Essex was rammed and sunk by an angry sperm whale, leaving the desperate crew to drift for more than ninety days in three tiny boats. Nathaniel Philbrick uses little-known documents and vivid details about the Nantucket whaling tradition to reveal the chilling facts of this infamous maritime disaster. In the Heart of the Sea—and now, its epic adaptation for the screen—will forever place the Essex tragedy in the American historical canon.

"Even though it is little remembered today, the sinking of the whaleship Essex by an enraged sperm whale was one of the most well-known marine disasters of the nineteenth century. Nearly every child in America read about it in school. It was the event that inspired Moby-Dick."


I've never seen a live whale, but pictures of them show their wonder, beauty, and at times, their ferocity. I knew nothing about this story before reading In the Heart of the Sea, but I bet the tale is still told in Nantucket. Especially among sailors. However, you don't have to be a seafaring enthusiast to enjoy this true story about a crew whose ship sank far away from land and their will to survive despite the odds, and there were many, stacked against them.

Nathaniel Philbrick is a seasoned writer who has written many historical nonfiction books. Philbrick has won many awards and has also been a finalist for the 2007 Pulitzer Prize for his novel Mayflower.  If you've ever read any of his books you can understand why. Philbrick writes with such ease and clarity that he makes the accounts of the past come alive.

It might sound strange to say that a nonfiction book had me on the edge of my seat, but it did. Philbrick recounts the tale of the Essex with such detail that I felt nervous many times for the crew--even though I knew how their story would end. Many times I was on the side of the whales. After all, the whaling industry during this time period almost wiped out the whale population. Who could blame the whale for being angry? The crew, of course, was just trying to make a living, but at such a steep cost.

"Whales were described by the amount of oil they would produce (as in a fifty-barrel whale), and although the whalemen took careful note of the mammal's habits, they made no attempt to regard it as anything more than a commodity whose constituent parts (head, blubber, ambergris, etc.) were of value to them. The rest of it--the tons of meat, bone, and guts--was simply thrown away . . ."


Phibrick didn't hold back on the brutality that was dished out to the whales. He didn't hold back on the process that the whalemen used to get the oil. It was really gross actually. Nor did he hold back on the brutality that the crew faced while drifting aimlessly in the ocean. Their hunger, their fear, their thirst. It reminded me of the quote from "The Rhyme of the Ancient Mariner" by Samuel Taylor Coleridge, "Water, water everywhere, nor any drop to drink." To be surrounded by water and yet unable to drink any of it seems like a living hell. But some of the men did survive, and they were forever changed because of it.

This was truly a remarkable story about a remarkable time in history. I appreciate the research that went into it. I haven't read Moby-Dick, but knowing that this story inspired it, inspires me to move it towards the top of my tbr pile. I know that there's a movie based on this book, but it doesn't compare. The book is better!