Q&A with Wendy Wax Plus a Giveaway

Avery and Nikki and I know readers have been looking forward to their return. I think it’s great that they’re back at Bella Flora in Sunshine Beach.

Yes, they’re back in Pass-a-Grille along with Kyra, Dustin, and most of the friends, family and crew of Do Over. They’re determined to figure out how to regain control of the show. Even Nigel, everybody’s favorite Paparazzi is there.

What’s going on with the show?
The episodes filmed in The House on Mermaid Point haven’t aired yet, but it’s already clear to the
Do Over cast that the footage is far too personal and will and show them at their worst whenever possible. Plus the treatment—miniscule budgets and no approval of editing along with contrived hardships and unnecessary intrusions by the network—all make it impossible for them to produce the sort of program they first imagined and, in Ocean Beach, thought they’d be creating. So this a major turning point. They’re looking for a way to reclaim Do Over and that’s what leads to the discovery of the seemingly abandoned mid-century modern Sunshine Hotel, next door to the Don CeSar and just two miles from Bella Flora.

Is this as complete a renovation as they’ve tackled in earlier books?

Absolutely. However, they’re getting resistance to even starting the project. The owners, two sisters, who inherited the hotel from their grandparents, have left it moldering for decades, unable to agree what to do with it. One sister wants to see it renovated and sold. The other believes that the key to a long ago family tragedy lies in the hotel and doesn’t want it touched.

So they really have their hands full.

With that and more, actually. Even when the cameras begin rolling, complications arise. Maddie’s romance with rock legend William the Wild gets complicated. The paparazzi remain on call 24/7 hoping to catch sight of mega movie star Danielle Deranian or Kyra and his son, Dustin. Nikki’s reluctance to commit to Joe could leave her to face the biggest challenge of her life alone. Even the Sunshine Hotel seems to be against them when the renovation uncovers a decades-old unsolved death and disappearance. Among the many emotional and physical ramifications of hosting a crime scene is that, quite simply, production grinds to a halt. Not a matter of life or death, of course, but it could be the death knell for the women of Ten Beach Road financially. 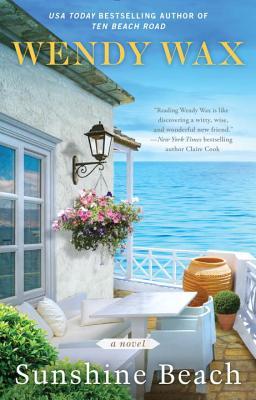 What else can you tell us about Sunshine Beach?

One of my favorite aspects of the book is the Sunshine Hotel itself and that’s because the inspiration for it came from my own childhood. You may know I’m a native of St. Pete Beach. When I was growing up, my family belonged to The Rellim Hotel and Beach Club on Pass-a-Grille Beach. I spent summer days at The Rellim pursuing my childhood job—fun—back and forth between the pool, in particular the diving board, and the Gulf, stopping occasionally for ice cream and “sun tan lotion.” I loved The Rellim. It opened in 1949 and closed in 1981. Needless to say, it was part of the inspiration for my Sunshine Hotel, giving me a chance to reminisce and to share a bit of what made it so special to me.

Are any other locations inspired by real places in St. Pete Beach?

No and that’s because actually I just highjack most of them whole and put them in the book. Many of the places I send my Ten Beach Road characters are real, though not all were around when I was still living there. Most of those I include are places I enjoy going to and it’s fun to share them with readers. The Paradise Grille, which used to be a concession stand, the historic Don CeSar and The Wharf Restaurant are among those mentioned in Sunset Beach. In fact, I’ll be doing a Sunset Book Signing at the Paradise Grille in June. It and my other southeast book tour dates and stops are on the Events & Appearances page at authorwendywax.com.

Yes! There a fabulous downloadable Sunshine Beach Book Club Kit available and I just love it. Everyone’s invited to check it out. It includes the “Wax Family Never Fail (cross my heart!) Egg Souffle” recipe that Maddie makes. It’s as close to a Cheez Doodle as anyone’s willing to give Avery first thing in the morning. It also includes my memories of “The Beach I Grew Up On” and pics of the real mid-century hotel that inspired Sunshine Beach, along with discussion questions. Oh, and just to remind everyone that book news, updates and giveaways can also be found on Facebook and Twitter and there’s a newsletter sign up on my site, as well. And that my USA Today bestseller, A Week at the Lake, will be published in mass market for the first time on Tuesday, June 28th . Thanks for giving me a chance to share Sunshine Beach with you and your readers!

USA Today bestselling  author and “beach read queen”* Wendy Wax was already well-known for her contemporary women’s fiction, including The Accidental Bestseller, when she decided to set her novel Ten Beach Road in St. Pete Beach, Florida, where she was born and raised.  It was the first time she’d set one of her books in her home state. Little did she know she’d be doing so again in the near future. Indeed, Ten Beach Road’s main characters, Maddie, Avery and Nicole, struck a chord with readers that resonated long after they closed the pages of the book.  So, when Wendy realized a new story was beginning to take shape around them, reader demand and her own enthusiasm for her protagonists was irresistible. She put aside her latest work in progress and Ocean Beach was born.

Heralded by as USA Today as “one of six books that belong in your beach bag,” Ten Beach Road introduced Maddie, Avery and Nicole, victims of a Ponzi scheme, just as they were deeded Bella Flora, a crumbling Mediterranean-Revival ruin on  Pass-a-Grille Beach, in lieu of their vanished life savings. At that time, all the reluctant DIYers dared hope was that renovating and selling the mansion would make them solvent.  They never imagined they’d end up starring in their own reality show, Do Over, strapping on their tool belts again in South Beach at the Art Deco Streamline home of an elderly comedian in Ocean Beach and, in Islamorada, making over the private island home of a rock legend in The House on Mermaid Point.

In Sunshine Beach they return to where it all started, back in their ---and Wendy’s---old stomping grounds, St. Pete Beach, where the success of their new project, a nearby mid-century modern beachside hotel left vacant for decades, will make or break their television careers and their finances.

It’s no coincidence that the location of Sunshine Beach’s Sunshine Hotel approximates that of The Rellim, the St. Pete Beach hotel and beach club on Pass-a-Grille established in 1941 and owned for years by friends of Wendy’s parents, the Millers.  “Moms played cards and the children, well, romped,” she says. “Long, hot summer days were spent eating ice cream sandwiches and racing across the sand between the hotel’s freshwater pool and the salty gulf.”  Memories of those days remain vivid for Wendy and, while her Sunshine Hotel differs in very many ways from The Rellim, which closed in 1981, she made it a point to imbue it with the spirit of those earlier days.

Kudos abound for Wendy’s writing, not simply for her Ten Beach Road titles, but for her other books, including A Week at the Lake, While We Were Watching Downton Abbey and Magnolia Wednesdays. The Atlanta Journal-Constitution says she “writes with breezy wit and keen insight into family relations.”  Her work, which has been compared to that of Jennifer Weiner** and Karen Joy Fowler*** has been featured in national media such as USA Today, Ladies’ Home Journal, CNN online and Woman’s World.

Wendy currently splits her time between Atlanta, where she has lived for almost twenty years, and New York City. When not writing, she visits with readers at bookstores and book events, reads, enjoys her and her husband’s newly empty nest and catches up with her sons on the serendipitous occasions when everyone ends up in the same place at the same time.

I have a copy of Sunshine Beach to give away to a lucky reader. Giveaway open to US addresses only. You must be at least 17 years to enter. Please read our giveaway policy before entering.