The Innocents Feature and Giveaway 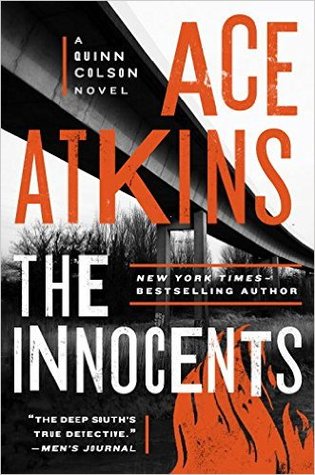 Quick Take: With his Quinn Colson novels, Atkins has established one of today’s most allegoric, atmospheric, and critically acclaimed literary series. “It’s a satisfying mix of modern Southern gothic atmosphere and thrilling action, salted with crackling humor,” according to the Tampa Bay Times.  “Atkins delves deeply into each character’s motives, making each a believable person,” wrote the Associated Press. And at the center of it all is “a flawed, valiant hero who’s impossible to dislike” (Kirkus Reviews, starred review) on “a joy ride into the heart of darkness” (Washington Post). In THE INNOCENTS, Atkins, hailed as “the Deep South’s true detective” (Men’s Journal), deepens readers’ engagement with former Army Ranger Quinn Colson, Sheriff Lillie Virgil, and the people of the fictional north Mississippi county he has made his own as he takes part in heart-pounding action and investigates a particularly horrific crime: the murder of an eighteen-year-old former cheerleader who is found walking down the middle of a country road engulfed in flames.

“Ace Atkins’ Quinn Colson series began with The Ranger, a thriller set in contemporary Mississippi, with the feel of classic westerns like Shane and High Noon, and the series just shot off from there,
getting better and better with each book.  With terrific, inflected characters and a dark, subtle sense of place and history, these are exceptional novels.”
—John Sandford, #1 New York Times-bestselling author of Extreme Prey

“In Quinn Colson, bestselling author Ace Atkins has created an American hero in a time when we need him. He displays the attributes we pine for and we hope still exist: honesty, humility, independence, integrity, and toughness when the situation calls for it. Imagine a tall and silent cowboy returning from the war to his native Mississippi to find it’s gone rotten and corrupt in his absence. His duty is to clean it up. That’s Quinn Colson.”
—C.J. Box, #1 New York Times-bestselling author of Off the Grid

“Ace Atkins’ Quinn Colson series is, quite simply, the best in crime fiction today – and also so much more. With a rich cast of characters, and a hero we can count on, these are tales of morality and desperation, of shocking violence and the enduring resilience of family and community.
And the emotional places they take us make them unforgettable.”
—Megan Abbott, New York Times-bestselling author

About the Author: Ace Atkins has developed into one of America’s most skillful and prolific novelists and not only does he write the Quinn Colson series, but he was also selected by the Robert B. Parker estate to continue the iconic Spenser series. Ace first gained attention on the football field, where he played defensive end for the undefeated 1993 football team (and landed himself on the cover of Sports Illustrated).  He then cut his writer’s teeth as a crime reporter in the newsroom of The Tampa Tribune, and earned a Pulitzer Prize nomination for a feature series based on his investigation into a forgotten murder of the 1950s.  He published his first novel, Crossroad Blues, at age 27, eventually becoming a full-time novelist at age 30. Ace now lives in Oxford, Mississippi – it’s a terrifically literary town, home to William Faulkner, Richard Ford and even John Grisham, as well as the inspiration for the down-trodden, God-fearing, hauntingly atmospheric fictional town of Jericho featured in the Colson series. Ace also writes essays and investigative pieces for several publications, including the Wall Street Journal, Garden & Gun, and Outside, and you can find out more about Ace and his novels on his official website: aceatkins.com, on Facebook Ace Atkins, and on Twitter@aceatkins.


Thanks to G.P. Putnam's Sons I have one copy to give away to a lucky reader. To enter, you must be at least 13 years old and have a US address. Please read our giveaway policy before entering.