The Sixth Idea Feature and Giveaway 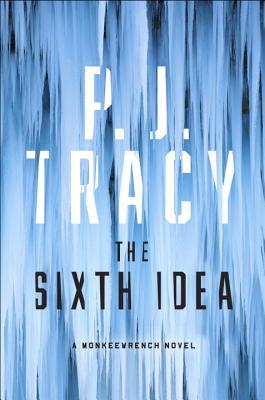 Quick Take: Led by the intrepid Grace MacBride, Monkeewrench is a gifted group of computer geniuses whose firm is brought in to help the cops solve their unsolvable cases.  Brilliant and way ahead of the curve in the world of technology, the eccentric team offers a glimpse of the future as it teams up with incisive Minneapolis homicide detectives Leo Magozzi and Gino Rolseth. Magozzi and Gino have turned to Monkeewrench when a barrage of seemingly random crimes shatters their serene Christmas holiday.  First, two friends are found murdered two hours and several miles apart.  Then, an elderly, terminally ill man is kidnapped from his home, while an Alzheimer’s patient goes missing from his care facility.  Initially the events appear unrelated, but when a young woman with casual links to both murder victims arrives home to find two dead men in her basement, a startling connection emerges—a connection that will make a target of anyone linked to the victims. Sixty years earlier—post Hiroshima and Nagasaki and long before the Internet—a top-secret team of scientists and engineers developed a blueprint for obliterating infrastructure without massive loss of life.  Known as The Sixth Idea, its purpose was to disrupt governments and agencies yet minimize human damage with a not-yet-developed technique for harnessing electromagnetic pulses.  This futuristic weapon had the potential to radically change warfare and dramatically reduce the death toll, but success depended on someone keeping the blueprint under wraps until technology caught up.  Decades later, the present day keepers of the secret weapon are conducting small-scale trial runs, while descendants of the original group are in the cross hairs of an assassin’s rifle.  When Magozzi and Gino catch the unusually complex case, they realize they’ll need sophisticated help from Monkeewrench to track down the killer.  With Grace and her trio of partners on board it’s only a matter of time before they unlock the mystery of who is pulling the strings and why.  But can they shut Pandora’s Box before Sixth Idea technology falls into the hands of terrorists?

P. J. Tracy is the pseudonym of the mother-daughter writing team of Patricia Lambrecht and Traci Lambrecht.  They each live in Minnesota, just outside of Minneapolis.

“If you haven’t been introduced to the Monkeewrench gang…you are missing out on complex characters, witty repartee, and exciting thrills.  Tracy, a mother-daughter writing team, skillfully incorporates a diverse array of elements…while keeping the thrill level high and the writing sharp and frequently funny,”--Library Journal

“The mother-daughter team of Patricia J. and Traci Lambrecht, who write this genial series, crack wise jokes…and the authors have another icicle-sharp plot.”--Entertainment Weekly

“The mixture of sudden death and weird humor proves the Lambrechts are as expert at walking the high wire as any writer—single act or double—now working the mystery circus.”--Chicago Tribune

Thanks to G.P. Putnam’s Sons, I have a copy to giveaway to a lucky reader. You must be at least 13 years old to enter and have a US address. Please read our giveaway policy before entering.