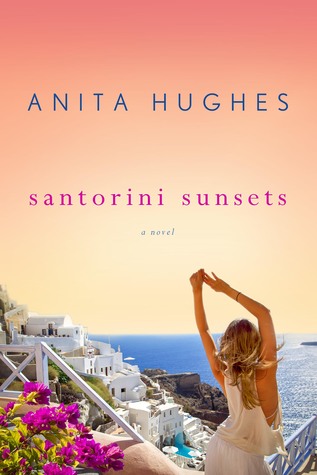 The seventh intoxicating love story by Anita Hughes, set in beautiful Santorini, Greece. When a Hollywood superstar and a NYC society girl fall in love, sparks fly and secrets are revealed.

Brigit Palmer is thrilled to be on the Greek Island of Santorini. She's here for her wedding to Hollywood heart-throb Blake Crawford, one of America's most eligible bachelors. Brigit's parents have rented a villa, and soon guests will arrive from all over the world for the intimate ceremony.

Brigit is a New York socialite, and she's just given up her position at a Manhattan law firm to run her father's philanthropic foundation. Things are finally falling into place. Love, career, family. Everything is going so well...until she steps into the garden and sees her ex-husband Nathaniel hiding in the rose bushes.

Nathaniel, a failed novelist, announces that Blake sold the rights to the wedding to HELLO! Magazine for two million dollars (donated to charity), and he is the reporter assigned to write the story. Everyone expects Brigit to have her happily ever after, including her mother who taught her how to lead the perfect lifestyle, her younger sister Daisy who impatiently wishes for her own love story, and of course, her fiancé. Things are supposed to work out for them. But when Brigit discovers an unsettling secret about Blake, she questions everything she's ever believed about love, and wonders if she's better off alone.

I was first introduced to Anita Hughes in 2015 with her novel Rome In Love. I was immediately taken with the story--which involved old letters written by Audrey Hepburn. That combined with her descriptions of Rome and the cuisine the characters indulged in made me a new fan of Hughes. I was eager to read another book by this author. I was fortunate to receive a copy of Santorini Sunsets from the publisher.

Santorini Sunsets is a pop culture paradise. You have a movie star--Blake, a socialite--Brigit, and the wedding of the century about to take place in what could only be described as Heaven on Earth. The bride-to-be is over the moon with happiness until her ex-husband--Nathaniel, who is also a reporter for HELLO! magazine, is hired to cover the wedding. And as you can possibly guess, three's a crowd. Nathaniel starts to dig into Blake's background, causing Brigit to get cold feet.

While Brigit's tale is the main story line, it's also accompanied by her mother's and sister's story. I have to confess, I liked the mom's--Sydney--story line the best. I thought it was more interesting and had more heart. The other two felt very superficial. There was a lot of name dropping, designer everything, and general overindulgence. I didn't really get a feel for the characters. I couldn't buy into their story. One thing I did like is Hughes' descriptions of the food and scenery. It made me want to jump on a plane and head straight for Santorini.

Overall, I think this is a good beach read. It's a light read and may be just what you need to relax. This book had both good and bad points for me. I do think Hughes is a talented writer and I will definitely try another book by her. This just wasn't my favorite.