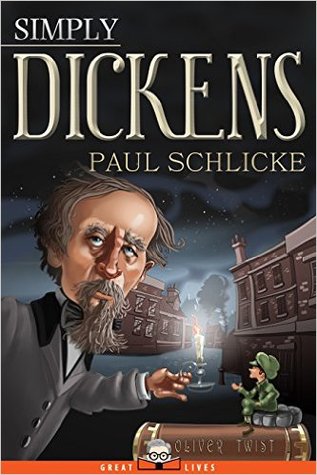 The quintessential Victorian author, Charles Dickens not only created some of the most vivid characters in English classic literature, but he also lived his own life with a zest and drama that were novelistic in their intensity. In Simply Dickens, author Paul Schlicke explores the fascinating link between Dickens the writer and Dickens the person—a dynamic and driven social reformer who worked to improve the living conditions of the poor.

Simply Charly is a fantastic publisher that likes to "explore history's greatest movers and shakers." They publish books about authors, scientists, artists, and so on. Though I'm sure several volumes could be filled on each distinguished person, Simply Charly condenses the information down to an informative but short book. Each book is written by a knowledgeable author. For example, Paul Schlicke, the author of Simply Dickens, has written several books on Dickens and served as president of the Dickens Society. He has many other accomplishments that point back to Dickens as well. If you have a question about Charles Dickens, he'd be the man to ask.

Simply Dickens is less than one-hundred pages. I wondered how much information Schlicke could include in such a brief book on such a well-known author. The answer: a lot. I was impressed with the wide variety of topics that were included. From Dickens' personal life to his great works of literature. Schlicke writes in an accessible way. He doesn't encumber readers with massive amounts of detail, but rather gives a smaller yet complete picture of who Charles Dickens was. This is a great book to read if you want to learn more about Dickens but don't have time to read a five-hundred-page biography. Readers of all ages can enjoy this book.