All Your Wishes Excerpt and Giveaway 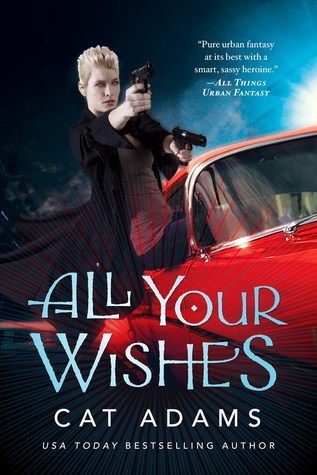 An ifrit tries to take over Celia Graves's body so he can free thousands of evil djinn to plague mankind!

A client begs Celia Graves—part human, part Siren, part vampire—to help return a genie to his bottle. The attempt makes Celia a target for the currently incorporeal ifrit. If she doesn't give him her body, he'll kill everyone she loves. If she does, he'll use her physical form to free thousands of evil djinn.

Celia's not going to hand over her body, but her client tries to trick her into it—so that he can kill the ifrit while it's trapped in her flesh. That doesn't end well for the client. Celia might not get paid for the gig, but she's got to get the ifrit re-bottled before all hell breaks loose—possibly literally!

Now written solely by C. T. Adams under the Cat Adams name, All Your Wishes continues this outstanding urban fantasy series with a thrilling new adventure.

I sat down abruptly in the nearest chair, my heart racing, my breath coming in short little gasps, feeling like an idiot as adrenaline poured through my body from having been startled.

Thus I was right by the phone when it rang again. I picked it up without thinking, from habit. “Graves Personal Protection.” My voice on the line sounded almost normal, not at all like my pulse was pounding.

“Celie, it’s me. Are you okay?” “Me” was Bruno DeLuca, mage extraordinaire and love of my life—at least at the moment. Whether that was going to continue was becoming increasingly dicey if last night’s argument was any indication. I shoved that thought firmly back down and answered.

“Fine. The cat was apparently playing in the boxes and we startled each other.”

He laughed, but only for a second, and it wasn’t the hearty guffaw it normally would’ve been. Something was up.

“I just hung up with Matty. Mom’s worse. I’m headed to Jersey on the next flight out.”

Oh hell. Bruno’s mom, Isabella Rose DeLuca, was a force of nature and one of the most powerful magic-wielders on the planet. But not so long ago, a group of rogue mages had tried to use the node near a supermax prison known as the Needle for dark purposes, and she’d been one of the four mages to step up and stop them. During the battle, more magic than any human body could handle had coursed through her. The instantly visible signs were that her hair turned snow white and she went blind. But the power had done other, and worse, invisible damage. She was dying a slow, agonizing death that I wouldn’t wish on anyone.

While I would never say it where Bruno or Matty could hear, I was pretty sure that part of why she’d been so badly hurt was because she’d chosen to take most of the magic into herself rather than allowing it to harm her sons—Bruno and his brother Matteo, also a magic-wielder. She was their mother. She’d protect them. She just would. It did make me worry a little about John Creede, the fourth participant in that working. Him she wouldn’t have gone out of her way to protect.

“I’m so sorry.” I meant it. Isabella and I have had our issues in the past, but I respect the hell out of her, and that last adventure had brought us to something of a truce. I might not be the woman she would’ve chosen for Bruno, but at least she didn’t hate me anymore. “Do you want me to come with?”

“No. Not yet anyway. The doctors think it’s going to be a while still. But she’s asking for me. I notified the university. They’ve got people covering my classes.”

“Do you want me to take care of the house?”

“Is there anything else I can do?” I felt helpless, frustrated, and sad. I could tell just from the sound of his voice that he was hurting so badly. But while I could guard people’s bodies from the monsters, I couldn’t protect the man I loved from this kind of pain. Nobody could, and it sucked.


“You’re doing it. I love you, Celie. And I’m sorry about last night.”

Thanks to Tor/Forge books I have two copies to give away. This giveaway is open to US addresses only. You must be at least 17 years old to enter. Please read our giveaway policy before entering. Good luck!


a Rafflecopter giveaway
All Your Wishes Cat Adams Excerpt giveaway