Review: A Most Extraordinary Pursuit 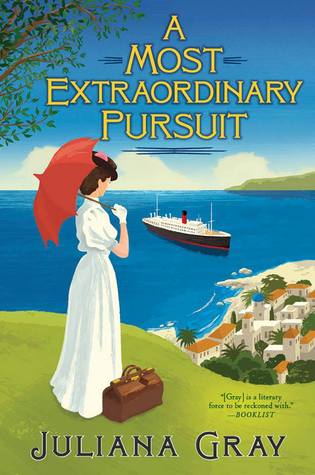 Known for her original plots, deft characterization, and lyrical voice, Juliana Gray presents an extraordinary novel of an uncommon pursuit… February, 1906. As the personal secretary of the recently departed Duke of Olympia—and a woman of scrupulous character—Miss Emmeline Rose Truelove never expected her duties to involve steaming through the Mediterranean on a private yacht, under the prodigal eye of one Lord Silverton, the most charmingly corrupt bachelor in London. But here they are, improperly bound on a quest to find the duke’s enigmatic heir, current whereabouts unknown. An expert on anachronisms, Maximilian Haywood was last seen at an archaeological dig on the island of Crete. And from the moment Truelove and Silverton disembark, they are met with incidents of a suspicious nature: a ransacked flat, a murdered government employee, an assassination attempt. As they travel from port to port on Max’s trail, piecing together the strange events of the days before his disappearance, Truelove will discover the folly of her misconceptions—about the whims of the heart, the motives of men, and the nature of time itself…

I think it was the cover that first piqued my interest in this book. After I read the summary, I was more than intrigued. Juliana Gray has written many historical romance books, but she is a new-to-me author. This book isn't a historical romance even though there is a bit of romance in it. It's more of a historical mystery.

Emmeline Truelove was the secretary to the Duke of Olympia. She's charged by his widow to find the missing heir, Maximilian Haywood, and return him to his home. Emmeline has never been far from home and has been given instructions by an unusual visitor to refuse this charge. However, she finds she can't. In addition, Lord Silverton is instructed to accompany her. Silverton and Emmeline are complete opposites except in their desire to find the missing Max.

There are so many things I liked about this book. Some of them will spoil the novel for those who haven't read it yet, so I won't tell you. I will tell you there are a few twists. There's also a mythology angle as well. I had many questions along the way. Some of them were answered and some only led to more questions. I like Emmeline and Silverton's relationship. They seemed to play off each other well. The only thing that I really didn't like about the book is that there really was no explanation given to some of the plot elements, and it seemed a little confusing at times.

A Most Extraordinary Pursuit is the first novel in what I assume will be a series. I've been sucked into this new world and can't wait to find out what happens next to the characters and maybe get a few more of my questions answered. So now, I'll have to wait impatiently until the next novel comes out.