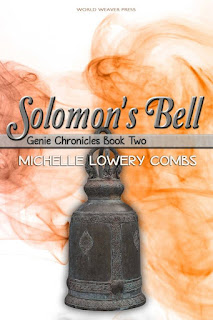 $11.95
Ginn thinks she has problems at home until she magically lands herself in 16th Century Prague. 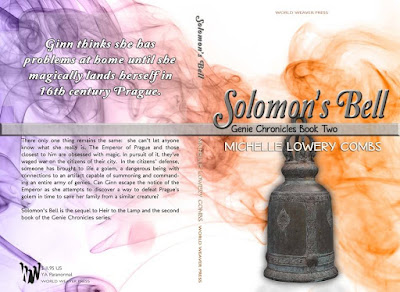 To save her family, Ginn uses her newfound genie powers to transport herself and her friends to 16th century Prague. Only one thing there remains the same as at home:  she can't let anyone know what she really is.

The Emperor of Prague and those closest to him are obsessed with magic. In pursuit of it, they’ve waged war on the citizens of their city. In the citizens' defense, someone has brought to life a golem, a dangerous being with connections to an artifact capable of summoning and commanding an entire army of genies. Can Ginn escape the notice of the Emperor as she attempts to discover a way to defeat Prague’s golem in time to save her family from a similar creature?

Solomon's Bell is the sequel to Heir to the Lamp and the second book of the Genie Chronicles series.

CJ’s new girlfriend is perfect. Freakishly perfect if you ask me… one of the cookie-cutter types at school with their immaculate hair and designer handbags. She even wears a pair of fat pearl earrings every day like so many of the others. They’re a crisp, preppy cult. I can’t stand it.

I’ve looked for other reasons to loathe Malory Clay besides her appearance. Unfortunately, aside from being a little clumsy, she’s perfect in every other way, too. She’s smart, polite to my parents when she’s at the house with CJ, and she goes out of her way to say hi to me in the halls at school. What kind of sophomore does that to an underclassman? Malory is even civil to my younger brothers Eli and Jasper, aka The Terrible Twosome. Although, when I think about it that could be another strike against her.

I’m supposed to be studying, so I try not to fathom how my dork of an older brother has ended up with a Barbie like Malory. Algebra, algebra, algebra, I remind myself. You have an exam tomorrow! But it’s no use. Not with Malibu Malory playing Xbox with my brother in the room next door. Something about her makes me tense and irritable. Especially when I compare her straight blonde hair that shimmers in the sun to the curly brown hair abomination I’ve been cursed with… apparently for life. It also irks me that Malory’s the right size for a teenage girl. I tower over all of my eighth-grade classmates like a human skyscraper.

I’m always amazed at Caleb’s ability to sense my mood even when we’re only texting. I’m tempted to complain about how much Malory’s uber awesomeness is getting under my skin, but I don’t want Caleb taking notice himself if he hasn’t already.

“Nothing. I’m good. Sick of school. Lol. Glad ur back, though.”
It isn’t really a lie—the school year started five weeks ago, and I’m already missing summer. I’ll be okay once basketball season starts in a few weeks, and it helps that Caleb is back at Alexander this semester. He spent most of his freshman year at Plainview High, Alexander’s biggest rival. Caleb is a sophomore like CJ and Malory, so we don’t have any classes together. We do see each other at lunch, though.

Caleb and I aren’t officially a couple—he hasn’t asked me to be his girlfriend or anything, and I’m pretty sure my parents would say he’s too old for me even if he did. He’s not even sixteen yet! What I can’t say to my mom and dad is: “What’s a two year age difference between people who’ve survived an imp attack together?”

My parents don’t know I’m a genie—neither did I until last year. They’d never let me out of their sight if they knew about the Order of the Grimoire and how they were probably trying to figure a way to summon and imprison me… again… at any given moment. Not a day has passed in the last ten months that I haven’t checked my closet and under the bed for one of the ugly lump-covered, winged imps the Order likes to use to spy on anyone they suspect to be in possession of any kind of magic.

What I wouldn’t give to be able to talk to Rashmere right now. I check my phone to see if he’s answered my last text.

“Wuts up, Rash? How’s Fiji?”
No answer. Probably surfing or something equally awesome, I decide. I try not to resent the fact that Rashmere is living it up on the other side of the world while I’m doing Algebra homework. The guy did spend the better part of two hundred years inside a lamp waiting for me to be born.

“Txt me when u can… need to talk. Hope you get a ton of sand in ur shorts every time u wipeout. ;-)”
I close my algebra book and push it to the far corner of my desk. I need a break! I hear Malory giggle through CJ’s open bedroom door and decide it’s time to leave.

“Hey, CJ,” I say to my brother, leaning against his doorframe. “I’m heading to the library for a while.”

“Yeah, okay,” CJ answers. He looks up at me and winks. The “library” is how CJ and I refer to the inside of the genie’s lamp: a code we use whenever I’m visiting the lamp and need CJ to cover for me with Mom and Dad.

Malory jumps to her feet from where she’s been sitting on the side of CJ’s bed, and a game controller that’s been lying in her lap falls to the floor. CJ winces at the cracking noise the chunk of black plastic makes against the hardwood. Nice! “You know, Virginia, I’m a good student. I’d be happy to help you study anytime,” Malory says sweetly, oblivious to my brother, who cradles the Xbox controller at Malory’s feet like it’s a puppy she’s just kicked. “It’d be no trouble at all. Besides, I’ve been hoping for the chance to get to know you better.”

I look at her blankly. Seriously, is she for real? “Um… thanks, but I’m okay. I like to get out of the house to study sometimes. Things can get pretty crazy around here.”

Michelle Lowery Combs is an award-winning writer and blogger who studied business and English at Jacksonville State University. She lives in Alabama with her husband and their army of children. When not in the presence of throngs of toddlers, tweens, and teens, Michelle can be found among the rows of her family's farm, neglecting her roots and dreaming up the next best seller. She is a member of the Alabama Writers' Conclave and the Society of Children's Book Writers & Illustrators (SCBWI).​
Check Michelle out at her website MichelleLoweryCombs.com
Solomon's Bell