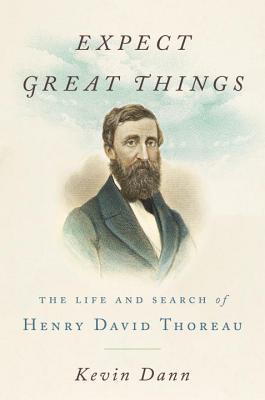 To coincide with the bicentennial of Thoreau's birth in 2017, this thrilling, meticulous biography by naturalist and historian Kevin Dann fills a gap in our understanding of one modern history's most important spiritual visionaries by capturing the full arc of Thoreau's life as a mystic, spiritual seeker, and explorer in transcendental realms.

This sweeping, epic biography of Henry David Thoreau sees Thoreau's world as the mystic himself saw it: filled with wonder and mystery; Native American myths and lore; wood sylphs, nature spirits, and fairies; battles between good and evil; and heroic struggles to live as a natural being in an increasingly synthetic world.

Above all, Expect Great Things critically and authoritatively captures Thoreau's simultaneously wild and intellectually keen sense of the mystical, mythical, and supernatural.
Other historians have skipped past or undervalued these aspects of Thoreau's life. In this groundbreaking work, historian and naturalist Kevin Dann restores Thoreau's esoteric visions and explorations to their rightful place as keystones of the man himself.

The National Park Service celebrated its centennial in 2016 and I can't help but wonder what Henry David Thoreau would have thought about the parks. Who else but Thoreau would fully appreciate them? Or would he be disappointed that there are only fifty-nine parks in America.  Because, after all, he was a naturalist. To see so many buildings and so few trees in some towns might have been discouraging. There's something so healing about nature. If you've ever been camping or just spent the afternoon outdoors, there's something about being out of doors that sets the mind at peace. I believe nobody felt that more than Thoreau.

Kevin Dann, who is also a naturalist, takes readers on a journey to find Henry David Thoreau. Thoreau wrote essays and poetry, he was a naturalist and transcendentalist, he was an abolitionist and at times practiced civil disobedience. He encouraged people to be observant and ask questions about the natural world. He had a longtime friendship with Ralph Waldo Emmerson and Bronson Alcott (Louisa May Alcott's father).

He also had more of an unconventional side as well. He believed in fairies. He was genuinely enthusiastic about life--even things most might consider mundane. He had a knack for finding unusual and rare plants because he asked tons of questions and mostly because he believed he could find them.

“In the long run, we find what we expect; we shall be fortunate then, if we expect great things.”


But everything I've written so far is a mere glimpse into Henry David Thoreau's life. This year marks two hundred years since his birth. So it seems appropriate that Kevin Dann has written a well-researched biography to help shed light on the complex author of Walden. He uses entries from his journals to help open doors into Thoreau's and the ever-changing world in which we live. He was a unique character whose philosophies help shape some of today's ideals and leaders. I think we would all do well to emulate even a small bit of his philosophy as well.
Expect Great Things Henry David Thoreau Kevin Dann review