Review: A Death By Any Other Name 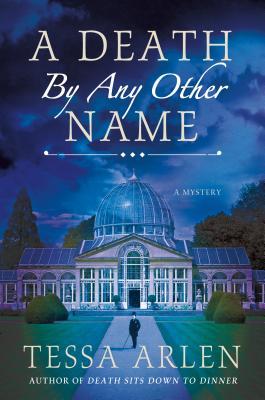 The elegant Lady Montfort and her redoubtable housekeeper, Mrs. Jackson, investigate a murder among a group of amateur rose-breeders while the idyllic English summer days count down to the start of the First World War.

When Mrs. Jackson receives a visit from a cook who believes she was an indirect witness to murder from a poisoned dish of breakfast kedgeree Lady Montfort promises to do what she can to clear the cook’s name, and contrives an invitation to Hyde Castle, the home of a self-made millionaire, to investigate a murder of concealed passions and secret desires.

With the help of the invaluable Jackson Lady Montfort sets about solving the puzzle surrounding the death of the rose society’s most popular member and discovers a villain of audacious cunning among a group of mild-mannered, amateur rose-breeders.

While they investigate, the headlines bring news of the growing crisis in the Balkans following the assassination of.the heir to the Austro-Hungarian empire. As each day brings more threatening news and the very real fear that Britain will be drawn into war, Lady Montfort and Mrs. Jackson must race against the clock to solve the mystery before Britain declares on Germany.

I fell in love with Lady Montfort and Mrs. Jackson a few years ago in Tessa Arlen's first novel, Death of a Dishonerable Gentleman. They seemed to be the perfect duo to solve mysteries. Right up there with Holmes and Watson. Lady Montfort has a keen mind and feels a duty to right certain wrongs. Mrs. Jackson takes pleasure in working for an illustrious family. Though she thinks Lady Montfort shouldn't really get involved in other people's affairs, she'd do anything to help her. And, of course, Mrs. Jackson's acute attention to detail makes her a valuable asset to Lady Montfort.

A Death By Any Other Name begins with a distraught, dismissed cook coming to Lady Montfort's home. The cook was dismissed after a guest died from food poisoning. She enlists the help of Lady Montfort who could turn her away. With the help of Mrs. Jackson, the two women visit the cook's previous residence to help clear her name with the guise of being rose enthusiasts. Once there, they soon discover that many of the guests have motives to want the gentleman, who may have died from food poisoning, dead. Not only is there a delicious murder to solve, the novel takes place on the cusp of the first world war.

Even though this is the third book in the Lady Montfort Mystery series, you could absolutely read this as a standalone. Though, I will warn you, once you read this book you won't rest until you've read them all. I had no sooner finished A Death By Any Other Name before I was checking to see when the fourth book would be available. So you see, it's clearly addictive. There are so many reasons I love this series: great characters, great plot, the time period, and, of course, there's nothing like a good whodunit. I can't wait to see what Arlen has in store for her characters in the fourth book.

A Death By Any Other Name Mystery review Tessa Arlen