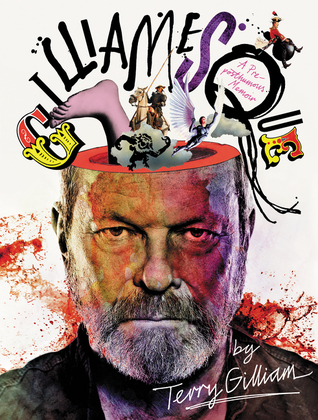 The screenwriter, innovative animator, highly acclaimed visionary film director, and only non-British member of Monty Python offers an intimate glimpse into his world in this fascinating memoir illustrated with hand-drawn sketches, notes, and memorabilia from his personal archive.
From his no-frills childhood in the icy wastes of Minnesota, to some of the hottest water Hollywood had to offer, via the cutting edge of 1960s and ’70s counter-culture in New York, L.A. and London, Terry Gilliam’s life has been as vivid, entertaining and unorthodox as one of his films.
Telling his story for the first time, the director of Time Bandits, Brazil, The Adventures of Baron Munchausen, The Fisher King, 12 Monkeys, and Fear & Loathing in Las Vegas—not to mention co-founder of Monty Python’s Flying Circus—recalls his life so far. Packed with never-before-seen artwork, photographs and commentary, Gilliamesque blends the visual and the verbal with scabrous wit and fascinating insight.

I have loved Monty Python since I was first introduced over 25 years ago and have continued loving them since. The Adventures of Baron Munchausen, Time Bandits, and The Fisher King are among my favorite movies. So, when I was offered the chance to read Gilliamesque, written about Terry Gilliam by the man himself, Terry Gilliam, I jumped.

This book offers great insight into the psyche of this brilliant but a bit off mind. He begins with the humble, normal life in Minnesota and the family’s eventual move to California. We learn of his time at Occidental College-the “Princeton of the west”, his move into the working world and the Army. All the while, the creative genius that later is evidenced in the Python’s and behind the camera, is in the story through his cartoons and his choice of employment. I found these formative years of his story fascinating. The people he met while living and going to school in the L.A. area to the decisions that he made of how to best serve his desire to develop the creative career he wanted, all worked to bring him where he is today.

I loved reminiscing over the Monty Python years with him and gaining a fresh perspective on their dynamic. The struggles that he has had in trying to stay true to his vision as a director versus what is expected from Hollywood were also enlightening. I thought the style of the book felt very much true to who Terry Gilliam is. If you are a fan of Monty Python, Terry Gilliam movies, or just want to delve into one of the most imaginative minds of today, this book is for you.