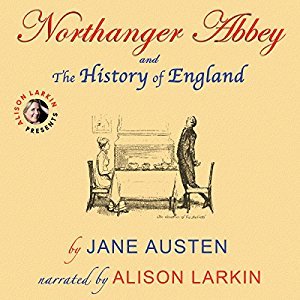 In Northanger Abbey, Catherine Morland, a clergyman's daughter, longs for the kind of romantic adventures she has read about in her favorite Gothic novels. After spending a season mingling with fashionable high society in Bath, she is invited to stay at Northanger Abbey where nothing is what it seems.


In The History of England, the teenage Jane Austen pokes fun at the historians of the day who pretended to be objective when they clearly were not, and wrote about the kings and queens of England with less respect (and more wit) than a British newspaper.

I've read and re-read Northanger Abbey many times. Revisiting old books is like revisiting old friends. So I was delighted to receive this audiobook to revisit this Gothic classic once again. And experience it for the first time on audio. There are many things that I really appreciate about this book. I love how Catherine's imagination runs away with her and the consequences it yields. It's a cautionary tale to say the least. Austen's nod to Gothic romance is brilliant.

Alison Larkin has narrated a long list of audio books, yet the Northanger Abbey audiobook was my first experience with this narrator. Larkin's voice was made for this audiobook. She embodied the characters' personalities effortlessly. I definitely recommend Larkin as a narrator.

I also love that included with Northanger Abbey is The History of England. It was written by Austen when she was fifteen. Though she was young, her writing style, humor, and voice comes through clearly. Overall, it was a pleasure listening to this audiobook.