Review: The Art of the Affair 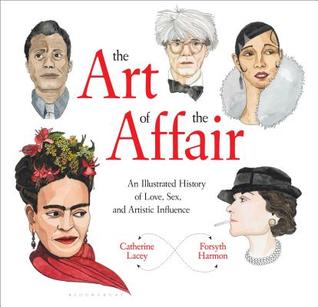 Poet Robert Lowell died of a heart attack, clutching a portrait of his lover, Caroline Blackwood, painted by her ex-husband, Lucian Freud. Lowell was on his way to see his own ex-wife, Elizabeth Hardwick, who was a longtime friend of Mary McCarthy. McCarthy left the father of her child to marry Edmund Wilson, who had encouraged her writing, and had also brought critical attention to the fiction of Anaïs Nin . . . whom he later bedded. And so it goes, the long chain of love, affections, and artistic influences among writers, musicians, and artists that weaves its way through the The Art of the Affair--from Frida Kahlo to Colette to Hemingway to Dali; from Coco Chanel to Stravinsky to Miles Davis to Orson Welles.

Scrupulously researched but playfully prurient, cleverly designed and colorfully illustrated, it's the perfect gift for your literary lover--and the perfect read for any good-natured gossip-monger.

Have you ever played the game Six Degrees of Kevin Bacon? If not, here's a quick summary: "Movie buffs challenge each other to find the shortest path between an arbitrary actor and prolific character actor Kevin Bacon. It rests on the assumption that anyone involved in the Hollywood film industry can be linked through their film roles to Bacon within six steps." This is kinda what The Art of the Affair is, except without Kevin Bacon. Cathrine Lacey found inspiration for this book by going through articles and noticing connections between artists. Not just friendships, but affairs, scandals, and more.

It was interesting flipping through the pages of this short book and seeing all the dots connected. This book is also illustrated by New York artist, Forsyth Harmon. Her drawings of the artists in the book add to the atmosphere that Lacey created. The Art of the Affair is perfect for the bookish who also love a bit of gossip too.

and Artistic Influence Catherine Lacey and Forsyth Harmon Nonfiction review Sex The Art of the Affair: An Illustrated History of Love