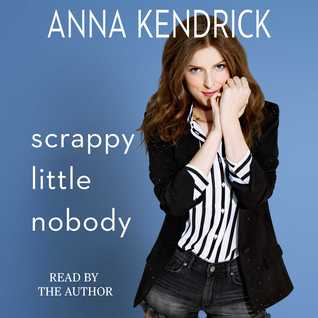 A collection of humorous autobiographical essays by the Academy Award-nominated actress and star of Up in the Air and Pitch Perfect.Even before she made a name for herself on the silver screen starring in films like Pitch Perfect, Up in the Air, Twilight, and Into the Woods, Anna Kendrick was unusually small, weird, and “10 percent defiant.”At the ripe age of thirteen, she had already resolved to “keep the crazy inside my head where it belonged. Forever. But here’s the thing about crazy: It. Wants. Out.” In Scrappy Little Nobody, she invites readers inside her brain, sharing extraordinary and charmingly ordinary stories with candor and winningly wry observations.With her razor-sharp wit, Anna recounts the absurdities she’s experienced on her way to and from the heart of pop culture as only she can—from her unusual path to the performing arts (Vanilla Ice and baggy neon pants may have played a role) to her double life as a middle-school student who also starred on Broadway to her initial “dating experiments” (including only liking boys who didn’t like her back) to reviewing a binder full of butt doubles to her struggle to live like an adult woman instead of a perpetual “man-child.”Enter Anna’s world and follow her rise from “scrappy little nobody” to somebody who dazzles on the stage, the screen, and now the page—with an electric, singular voice, at once familiar and surprising, sharp and sweet, funny and serious (well, not that serious).


Scrappy Little Nobody is a collection of essays by Anna Kendrick. The topics range from early childhood recollections, life as a penniless actor, and Hollywood stardom. I'm usually not big on celebrity memoirs, but I thought I'd give this one a shot since I enjoyed some of her movies. I think the first movie I saw her in was Twilight. However, the movie that made me a fan was Pitch Perfect. I didn't really know much about Kendrick's life before listening to this audiobook. I had no idea she was a child actor or that she performed on Broadway. She even won a Tony. As you can tell, I was totally in the dark as far as Anna Kendrick was concerned.

Kendrick is the narrator of her book and she does a superb job. It has a casual tone that makes you feel like it's just the two of you in a conversation. Scrappy Little Nobody has the same edgy snarkiness that Kendrick's characters often portray in movies. I often wondered if it's her actual personality or if she's giving the people what they want--so to speak. But despite my misgivings, the audiobook was interesting and entertaining. It does feel as if she's being mostly honest with her readers. She doesn't gloss over the bumpy road to stardom or make it sound easy.

Scrappy Little Nobody is must for Anna Kendrick fans who want to get to know her better.

Check out an excerpt from Scrappy Little Nobody below:

*Disclosure: This post contains an affiliate link to Amazon.I received this audiobook from Simon and Schuster Audio in exchange for a fair review. The opinions expressed here are my own.
Anna Kendrick Audiobook Scrappy Little Nobody