Audiobook Review: The Viscount Who Loved Me 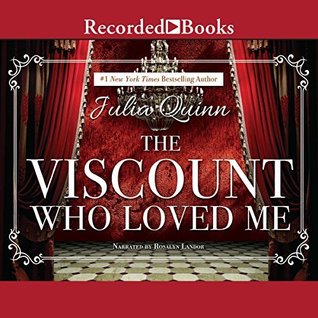 1814 promises to be another eventful season, but not, this author believes, for Anthony Bridgerton, London's most elusive bachelor, who has shown no indication that he plans to marry. And in all truth, why should he? When it comes to playing the consummate rake, nobody does it better... - Lady Whistledown's Society Papers, April 1814

Contrary to popular belief, Kate is quite sure that reformed rakes do not make the best husbands - and Anthony Bridgerton is the most wicked rogue of them all. Kate is determined to protect her sister - but she fears her own heart is vulnerable. And when Anthony's lips touch hers, she's suddenly afraid she might not be able to resist the reprehensible rake herself.

I think it's safe to say that Julia Quinn is the queen of historical romance. Well, she is for me anyway. I've read several of her books and loved every minute of it. This is the first time I've listened to one on audio. I'm so glad I had the opportunity to listen to The Viscount Who Loved Me. It's read by the esteemed Rosalyn Landor, who I think the Brigertons would entirely approve of to narrate their story.

It started with a bee sting. Anthony has  never really gotten over his father's death, a man that he loved more than life. He's stumbled through life becoming known as one of the greatest rogues of his age. He's finally decided that it's time for him to settle down. He makes a list of attributes he wishes in a future wife, but he's adamant that whoever he chooses he must not fall in love with. He meets the perfect woman: Edwina Sheffield. She is everything he's hoped for, but her sister is the only obstacle standing in his way.

Kate Sheffield loves her sister. She wants to see her happily married, but not to the most notorious bachelor in London. From her first meeting with Anthony Brigerton, she tells him plainly that she will do anything to protect her sister. Anthony takes it as a challenge. The more they're thrown together, the less interested he is in Edwina. After all it's Kate who he thinks about, dreams about.

Anthony and Kate's relationship reminded me a lot of Benedick and Beatrice in Much Ado About Nothing. Kate was almost reminiscent of a Jane Austen character. Not any one in particular, but more of a combination of Elizabeth Bennett and Elinor Dashwood. Anthony was the perfect match for such a character, though at times I thought him rather brutish. But their characters meshed well together.

Julia Quinn makes almost every character in her novel charming on some level. Even the minor characters I love. If you've not met the Bridgertons yet, you really need to. And if you get the chance, listen to them on audio, but keep your earbuds handy for the steamy scenes!