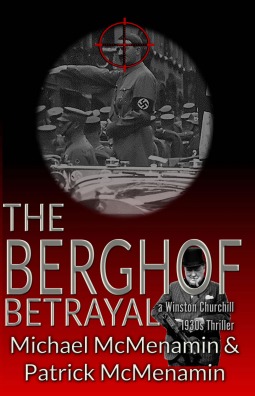 “Weiland Herzfelde has absolutely reliable information that the Nazis plan a fake attempt on Hitler’s life which is to be the signal for a general massacre. The sources of his information are the SA in Dortmund and a tapped telephone conversation between Hitler and Röhm.”

Churchill learns of the fake plot and persuades Mattie McGary, William Randolph Hearst’s top photojournalist and Churchill’s adventure-seeking Scottish god-daughter, to investigate. McGary meets up in Germany with her fiancé, American lawyer and former MID agent Bourke Cockran, Jr., who is trying to acquire the rights to Rear Area Pig, a book exposing Hitler’s less-than-heroic wartime service. Mattie and Cockran attempt to stay one step ahead of the SS loyal to Hitler who will stop at nothing to keep Cockran from acquiring the book and Mattie from learning the truth about the fake plot.

Michael and Patrick are the co-authors of the award-winning 1930s era “Winston Churchill Thriller” series. The first three books in the series—The DeValera Deception ,The Parsifal Pursuit and The Gemini Agenda—all were named Grand Prize Winners for Fiction by the Next Generation Indie Book Awards and Book of the Year for Thriller/Suspense and Historical Fiction by ForeWord Reviews.

Check out another interview with Michael about Churchill's Irish-American mentor
https://www.youtube.com/watch?v=btXx8rKDszM

Literary Awards and Praise for the Winston Churchill Thrillers:

"A fast-paced historical thriller. The historical aspects of the novel are especially true to life, giving it a strong factual feel.” -Suspense Magazine

“Evocative of Ken Follet and Steve Berry at their best, The Parsifal Pursuit is a thrilling ride through pre-World War II Europe, a masterful page-turner you won't soon forget!” D.E. Johnson Award-winning author of the historical mysteries The Detroit Electric Scheme and Motor City Shakedown.

"Vivid portrayal of Churchill and unusual insights into Hitler's character, a fast-paced thriller that is hard to put down." Richard Langworth, Author of Churchill By Himself.

“This series set in America and Europe during the 1930s gets better each time out. The story about secret experiments on twins is both chilling and irresistibly entertaining.” Les Roberts, Past President, Private Eye Writers of America.

“The McMenamins have once more successfully woven together history and fantasy in a dramatic thriller.” David Freeman, Editor of Finest Hour, The Churchill Centre Journal.

Michael McMenamin and Patrick McMenamin are the co-authors of the award winning 1930s era “Winston Churchill Thriller” series. The first three novels in the series—The DeValera Deception, The Parsifal Pursuit, and The Gemini Agenda—received a total of 14 literary awards. The Berghof Betrayal is their fourth Winston Churchill Thriller and they are currently at work on their fifth, The Silver Mosaic. Both Michael and Patrick have travelled extensively in Europe, South America, Central America and Asia while Patrick has also travelled in the Middle East and Africa.

Michael is the author of the critically acclaimed Becoming Winston Churchill, The Untold Story of Young Winston and His American Mentor [Hardcover, Greenwood 2007; Paperback, Enigma 2009] and the co-author of Milking the Public, Political Scandals of the Dairy Lobby from LBJ to Jimmy Carter [Nelson Hall, 1980]. He is an editorial board member of Finest Hour, the quarterly journal of the the International Churchill Society in Washington, D.C. and a contributing editor for the libertarian magazine Reason. His work has appeared also in The Churchills in Ireland, 1660-1965, Corrections and Controversies [Irish Academic Press, 2012] as well as two Reason anthologies, Free Minds & Free Markets, Twenty Five Years of Reason [Pacific Research Institute, 1993] and Choice, the Best of Reason [BenBella Books, 2004]. He was formerly a first amendment and media defense lawyer and a U.S. Army counter-intelligence agent.