Into Your Arms Release Day Blitz

Description
Get fired up for Into Your Arms, the first book in the sexy new Squad Stories series from New York Times and USA Today bestselling author Chelsea M. Cameron!

Freya has secrets she doesn’t intend to share. Not with her new friends on the cheerleading squad at Maine State University, and certainly not with sexy lumberjack-look-alike Rhett. Just because sparks flew between them at a bar one night doesn’t mean he gets to know why she transferred to MSU. When Freya dares Rhett to come to cheerleading practice, she never expects to see the dark-haired lumberjack again.

Except Rhett is the last person to turn down a dare, especially when it comes from a pixie-sized blonde. When Rhett wows the squad and becomes Freya’s stunt partner, his hands come far too close for comfort. But as Freya and Rhett’s hot post-practice sessions bring them closer, she risks her secrets being revealed. Can Freya chance exposing who she really is to the guy who wasn’t supposed to win her heart?

Author Bio
Chelsea M. Cameron is a New York Times/USA Today Best Selling author from Maine, whose books include Deeper We Fall. She's a red velvet cake enthusiast, obsessive tea drinker, vegetarian, former cheerleader and world's worst video gamer. When not writing, she enjoys watching infomercials, singing in the car, tweeting (this one time, she was tweeted by Neil Gaiman) and playing fetch with her cat, Sassenach. She has a degree in journalism from the University of Maine, Orono that she promptly abandoned to write about the people in her own head. More often than not, these people turn out to be just as weird as she is. 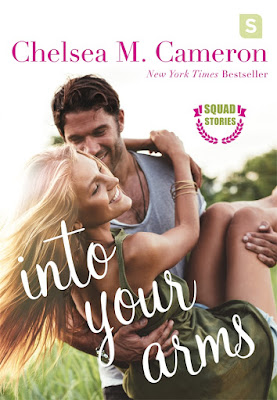 Into Your Arms by Chelsea M. Cameron Excerpt

I’m done with the salad long before Rhett finishes everything else, so I just kind of keep tossing it and watch him. He moves with the same fluidity that he does during cheer. For a big guy, he’s graceful, and he’s an excellent dancer. I hate how sexy it is.
Rhett starts whistling to himself. He does that a lot, and it’s not annoying, surprisingly. I keep trying to find flaws, but I can’t seem to. There must be something. I just have to work harder to find it.
That means that I’ll probably have to keep coming over here. Oh, well. At least the food is good?
Two hours later I’m on Rhett’s couch again, my hands on my stomach and regrets in my heart.
“I should have waited to have that cupcake, but it just looked so good,” I groan, resting my head back against the cushion. I kind of want to stretch out and take a nap.
“I’m glad you liked my food and I’m sorry you’re having regrets.” He tips his head to the side and gives me a tiny smile. It still does things to me. Everything he does affects me. I wish I could find a way to make it stop.
Rhett and I hold eye contact for just a little too long. I inhale slowly and the air in the room changes. Shifts to something else. And even though my stomach is sloshy and full, I can’t ignore the magnetic pull toward Rhett. My body leans toward his without even realizing.
Somehow, I’m able to slam on the brakes and pull back. I blink a few times and take another breath. Shit. That was close. Rhett clears his throat, and his face is just a little red under his beard.
He lets out a slow breath and chuckles under his breath.
“What?” I ask, afraid to know the answer.
“Nothing,” he says, his voice a little rough. He turns to look at me again, but I don’t meet his eyes. I can’t let that happen.
“I should probably get home,” I say, even though it’s only eight. I need to get out of Rhett’s apartment, which is filled with his things and his scent and him. It’s too much to handle right now. It’s scrambling my brain.
“Sure,” he says in a distant voice. He pushes himself off the couch and holds out his hands to help me up. If I wasn’t so full, I would ignore him, but I am, so I take his hands. They feel new and familiar all at once. His hands dwarf mine, but he holds me gently. He’s still holding my hands and he needs to stop holding my hands and I need to go home.
Right now.
But then I look up at him and I just . . . I kiss him. I pop up on my toes and reach for his mouth and I kiss him. Just like that. His mouth is lush and soft. He’s surprised at first and then he sinks into it, and I brush his bottom lip with my tongue and then I realize that I’m kissing Rhett and I should definitely not be kissing Rhett.
I drop his hands as if they’re burning me and scoot around him, heading for the door.
“So, I’ll see you tomorrow? Thanks for the food, I really have to go, bye,” I say in a rush and basically bolt. He calls after me, but I don’t listen.
I’m shaking when I get to my car and have to sit and breathe for a second before I can actually drive away. Part of me expects him to follow me after such a hasty exit, but he doesn’t.
So I take another shaky breath before I turn on my car and drive back to my lonely apartment.