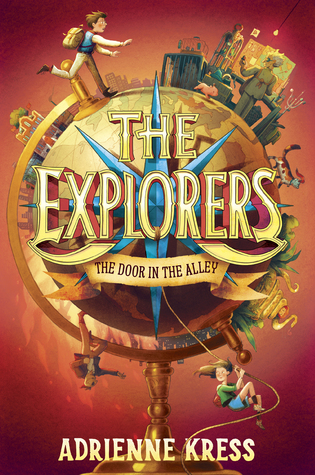 Featuring a mysterious society, a secretive past, and a pig in a teeny hat, The Explorers: The Door in the Alley is the first book in a new series for fans of The Name of This Book Is a Secret and The Mysterious Benedict Society. Knock once if you can find it—but only members are allowed inside. This is one of those stories that start with a pig in a teeny hat. It’s not the one you’re thinking about. (This story is way better than that one.) This pig-in-a-teeny-hat story starts when a very uninquisitive boy stumbles upon a very mysterious society. After that, there is danger and adventure; there are missing persons, hired thugs, a hidden box, a lost map, and famous explorers; and also a girl on a rescue mission.

The book begins with Sebastian, a boy with a very structured life that doesn't waver, who happens upon a door he's never noticed that sets his whole world ablaze. Sebastian can't stop thinking about this door and as happenstance would allow, he meets a man with a pig wearing a tiny hat. The mystery man leads him to the mysterious door where Sebastian meets the most curious people and comes across an interesting mystery. Then he meets a girl of intrigue, Evie, who had a hard-knock life. Meeting Evie sets his structured world into a whirlwind filled with bad guys, chases, and daring feats.

You'll find it hard to put this book down once you get started. If you're a fan of  The Name of This Book Is Secret, The Mysterious Benedict Society, and Series of Unfortunate Events, you're going to want to check this book out.