Review: Sidney Chambers and the Persistence of Love 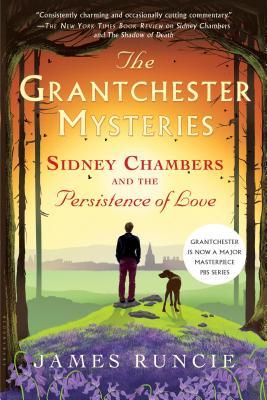 The sixth book in the James Runcie's much-loved Granchester Mystery series, which has been adapted for Masterpiece's Grantchester starring James Norton, sees full-time priest, part-time detective Sidney Chambers plunged back into sleuthing when he discovers a body in a bluebell wood.

It is May 1971 and the Cambridgeshire countryside is bursting into summer. Attending to his paternal duties, Archdeacon Sidney Chambers is walking in the woods with his daughter Anna and their aging Labrador, Byron, when they stumble upon a body. Beside the dead man lies a basket of wild flowers, all poisonous. And so it is that Sidney is thrust into another murder investigation, entering a world of hippies, folk singers, and psychedelic plants, where love triangles and permissive behavior seem to hide something darker.

Despite the tranquil appearance of the Diocese of Ely, there is much to keep Sidney and his old friend, Detective Inspector Geordie Keating, as busy as ever. An historic religious text vanishes from a Cambridge college; Sidney's former flame, Amanda Richmond, gets a whiff of art-world corruption; and his nephew disappears in the long, hot summer of 1976.

Meanwhile, Sidney comes face to face with the divine mysteries of life and love while wrestling with earthly problems--from parish scandals and an alarmingly progressive new secretary to his own.

Over the past few years, I have watched Grantchester on PBS. It didn't take me long to become a fan of the series. It's about a vicar, Sidney Chambers, that lives in a small parish and through extenuating circumstances meets up with a detective, Inspector Geordie Keating, who reluctantly enlists the vicar's help in solving a mystery. The two eventually become friends and a partnership is formed. I know I don't do the series justice by my summary, but trust me, it's good.

Sidney Chambers and the Persistence of Love is the sixth book in The Granchester Mysteries series. Runcie writes in such a way that you can just jump into the sixth book without reading the previous books. However, if you're watching the series, there are definite spoilers ahead, so turn back now. I'm not kidding. If you're still reading then this is on you.

Sidney Chambers and the Persistence of Love takes up in May of 1971. Grantchester, though a quiet town, doesn't stay that way for long. Sidney is a Archdeacon and is searching for flowers with his daughter Anna when they stumble upon a dead body. It isn't long before he and Geordie are on the case. And that's not the only one. There's a few more in this book that include a missing book, a sexual assault case, and a missing child, who happens to by Sidney's nephew.

I can see now how perfectly the characters of the television series are cast. Runcie hit the mark with these characters. Sidney Chambers is often hit with the dark side of life, but remains faithful to his calling. He is flawed which makes him seem real. He struggles in his marriage, as a father, and in life. Geordie is passionate and often disagrees with Sidney, but their respect for one another often sees them through the difficulties. Which makes their friendship lasting.

If cozy mysteries are your thing then Sidney Chambers and the Persistence of Love is a book you don't want to miss. In fact, the entire Grantchester series (both book and television) is one you don't want to miss. Season three of Grantchester will begin in the US in a few weeks, and I can't wait to see what Runcie has in store for these characters.

*I received a copy of this book from the publishers in exchange for a review. All my opinions are my own. This post contains an affiliate link.