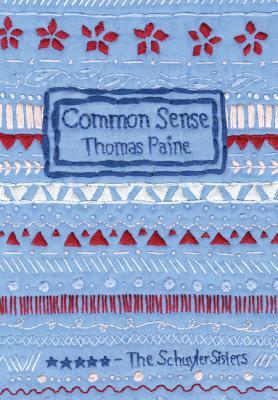 Originally published anonymously in 1776, the pamphlet Common Sense passionately argued for Colonial independence from Great Britain and ultimately served as a cornerstone of the American Revolution. Its author, Thomas Paine, immigrated to the American Colonies in 1774 at the urging of Benjamin Franklin, and became a leading voice of colonial discontent. With Paine’s impassioned and witty voice, Common Sense inspired everyone who participated in the American Revolution and remains one of the most notable early American texts to this day.

Though cherished for over 200 years among academics, Common Sense was recently thrown into the pop-culture spotlight thanks to the Pulitzer Prize and Tony Award-Winning musical, Hamilton. With year-long waitlists, astronomical ticket prices, and a fictitious disease (Hamilaria) the musical’s popularity transcends class, gender, and region. In one of the play’s most memorable numbers (“The Schuyler Sisters”) Angelica Schuyler claims, “I’ve been reading Common Sense by Thomas Paine.” For those who’ve seen the show (or obsessively listened to the soundtrack) but haven’t read the original source material there is now this covetable gift edition that fans will love. Common Sense (William Morrow; June 6, 2017; ISBN: 9780062695529; $13.99) gets a 21st century makeover with an embroidered cloth cover, novel trim, and raised embossing effects.

Whether you’re yearning for a more eloquent time or looking to instill a love of history, this text makes the perfect gift for:

Thomas Paine was born in England but migrated to America with the help of Benjamin Franklin. In America, Paine found his footing in the revolutionary unrest of 1770s. He wrote a series of pamphlets, but his most famous was Common Sense. This pamphlet was widely read and sold more than 120,000 copies in the first few months. His clear and concise argument put forth in the pamphlet inspired people from the colonies to fight for a egalitarian government.

A few centuries have passed since Paine first published Common Sense, but its still as relevant today as it was then. Addressed to the "Inhabitants of America," Paine confronts the following subjects.

I. Of the Origin and Design of Government in general, with concise Remarks on the English Constitution

II. Of Monarchy and Hereditary Succession

III. Thoughts of the present State of American Affairs

IV. Of the present Ability of America, with some miscellaneous Reflections

Common Sense has been brought back to the center of attention with the hit musical Hamilton. William Morrow has recently published this new gift edition that would make a great addition to anyone's personal library or as a gift to a graduate, history buff, or, of course, a fan of Hamilton. Common Sense is a book every citizen should read at least once in their life. This powerful book inspired a generation to fight for their independence, and in doing so, won our freedom.

"Under our present denomination of British subjects, we can neither be received nor heard abroad; the custom of all Courts is against us, and will be so, until by an independence we take rank with other nations."


*I received this book from William Morrow. This has in no way influenced my opinion. This post contains an affiliate link.