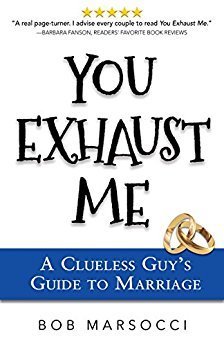 Why a marriage guide for clueless guys? Do you really have to ask?

About 2 million guys get married every year in the United States alone, and many (perhaps most) have no clue about the world they will enter once they say, “I do.”

Candid and humorous, You Exhaust Me, A Clueless Guy’s Guide to Marriage, speaks directly to clueless men everywhere. With more than 20 years’ experience (and counting) as a husband, Bob Marsocci provides valuable insight on what guys should really expect after the wedding rings go on. Whether you are engaged, a newlywed or have been married for several years, Bob’s personal and often hilarious marital anecdotes and lessons (often learned the hard way) will enlighten any guy. If that’s you, take it from a formerly clueless guy: If you want to avoid hearing “You exhaust me!” from your wife, read this book. It’s got the secret sauce to keeping her (and you) happy. 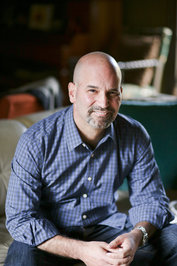 1. Why do you think guys are clueless when it comes to marriage?
I think a lot of guys are clueless when it comes to marriage because of what I would describe as their predominant environment up until they marry. My background is a perfect example. I grew up in a testosterone-laden environment for the first 30 years of my life that shaped my outlook and behavior.
Growing up in a household with three brothers, an old-school Italian father and doting Italian mother - well, that speaks for itself. In college I lived in a fraternity—the definitive “boys being boys” environment—with about 40 guys, and after graduating, I lived for several years in the proverbial bachelor pad with three male roommates. I was, and became, a product of my environment; an environment that often engendered juvenile and impetuous behavior.
In all those years of living with other guys, one thing became abundantly clear to me: while single guys can tend to at times be self-centered and immature, they let things slide. When I was living with my roommates, if I made dinner for myself and didn’t offer them something to eat, they didn’t care. If I made plans for a weekend and didn’t include them, it wasn’t a big deal.
Becoming totally comfortable with, and accustomed to, a pervasive cavalier attitude that is inherent in such a male-dominant environment, I felt right at home. Mowgli, the “man cub” in The Jungle Book stories, behaved like a wolf because that was his environment—he was part of the pack and that’s all he knew. I acted and behaved like a typical guy because I was part of the “pack” and that’s all I knew.
When I married my wife it was the first time I lived with the opposite sex and suddenly, I was living with someone who was pretty much the exact opposite of my buddies -- someone who cared deeply about what I said and how I behaved.
To say this was not an easy transition for me is an understatement. For decades I had just been one of the guys, and being one of the guys was antithetical to my life and role as a husband.
I had many "lessons learned" but eventually, I got the hang of it.
2. What was the best advice you received before you got married?
The best advice I received before I got married was "have an open mind." To this day, even after more than 22 years of marriage (and counting), I try to have an open mind every day.
3. What was the worst advice you received?
I honestly don't recall receiving any bad advice before I got married.
4. Do you have any advice for married women?
Be patient with your husbands. I know at times we husbands can behave like overgrown children. I'm a perfect example -- just recently, the youngest of my three daughters said to me, "Dad, you're like mom's fourth child." My wife has shown amazing patience with me over the years.
5. What is the most misunderstood thing when it comes to marriage?
I think the most misunderstood thing when it comes to marriage is what makes it successful. Sure, it's important to listen to, communicate with, and be supportive of your spouse, but there's something else more important.
When I was doing research for my book I came across a story in the Los Angeles Times about a team of psychologists at the University of Washington that studied 130 newlywed couples for six years in an effort to find ways to predict marital success and failure. The study found that marriages that worked well and were successful all had one thing in common -- the husband was willing to give in to the wife. "Give in to the wife." That is sage advice and I agree with it wholeheartedly.