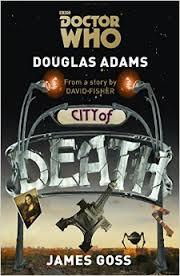 Based on the beloved Doctor Who episode of the same name by Douglas Adams, the hilarious and brilliant author of The Hitchhiker’s Guide to the Galaxy, comes City of Death…
The Doctor takes Romana for a holiday in Paris—a city which, like a fine wine, has a bouquet all of its own. Especially if you visit during one of the vintage years. But the TARDIS takes them to 1979, a year whose vintage is soured by cracks in the very fabric of time itself.
Soon they are embroiled in an alien scheme which encompasses home-made time machines, the theft of the Mona Lisa, the resurrection of the much-feared Jagaroth race, and the beginning (and quite possibly the end) of all life on Earth.
It’s up to the Doctor and Romana to thwart the machinations of the suave, mysterious Count Scarlioni—all twelve of him—if the human race has any chance of survival.
But then, the Doctor’s holidays tend to turn out a bit like this.

When I saw the combination of two of my favorite things, Doctor Who and Douglas Adams, I couldn’t resist. I have become a huge fan of Doctor Who with the revival of the series in the last ten or so years. I’m just getting into the classic episodes so the City of Death story line was completely new to me. I’m also an admirer of Douglas Adams works, especially the Hitchhiker’s series. James Goss has collected together the story in novel form from rehearsal scripts, shooting scripts, and the finished program. It is brilliant Doctor Who storytelling.
The setting is Paris, 1979 and the story revolves around “home-made time machines, the theft of the Mona Lisa, the resurrection of the much feared Jagaroth race, and the beginning (and quite possibly the end) of all life on Earth.” (taken from the back cover of the book). There is action, intrigue, time travel, running (always lots of running), all the things that make for a great Doctor Who story. When you add in the astounding wit and humor that made Douglas Adams great, you have a masterpiece.
Goss was able to put together a very readable and enjoyable novel with while keeping much humor by retaining many of the stage directions included in the rehearsal scripts by Douglas Adams. The story flows and sometimes rushes ahead at breakneck speed. If you are a Doctor Who or Douglas Adams fan this is THE story for you. I need to get my subscription to Britbox now so I can watch City of Death episodes.

** This post contains an affiliate link, which means that if you click on one of the product link, I’ll receive a small percentage. It's actually really sad. I couldn't even buy a cup of coffee with what I made from my earnings last year.