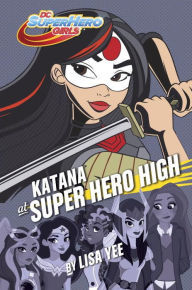 Get your cape on with the DC Super Hero Girls(TM)--the unprecedented new Super Hero universe especially for girls! Readers of all ages can fly high with the all-new adventures of Wonder Woman(TM), Supergirl(TM), Batgirl(TM), and some of the world's most iconic female super heroes as high schoolers!Sword-wielding Katana isn't like most high school students--but with classmates like Wonder Woman, Batgirl, and Supergirl, Super Hero High isn't like most high schools! In addition to training to be a super hero, Katana also follows the noble warrior traditions of the Samurai. Now an unknown source has given her the responsibility of guarding a hundred ancient Samurai swords--but why her, and for what purpose? With the help of Wonder Woman, Supergirl, Ms. Martian, and some of her other super friends, she intends to find out. But she just made captain of the fencing team, she has a huge school project due, and a villain with ties to her family's past seems to be amassing an army. Maintaining her inner peace isn't going to be easy . . . . . . but Katana has the steel to save the day! Award-winning author Lisa Yee brings this edge-of-your-seat adventure to life with mystery, thrills, and laughs. Move over Batman(TM) and Superman(TM)--the DC Super Hero Girls are ready to save the day and have fun doing it!

Katana at Super Hero High by Lisa Yee is the fourth book in the DC Super Hero Girls series. The series focuses on DC's famous female super heroes, and also some villains. But before they become mortal enemies, they're just your not-so-average teenage supers that are learning what it means to be a hero and dealing with all the pressures that come along with it.

The students at Super Hero high are given a legacy assignment where they must interview members of their families to find out where they came from, their histories, their roots. Katana thinks that this assignment will help uncover the mystery of her grandmother's disappearance. And if that was all she had to worry about, it would be enough, but it's not. When mysterious swords appear along with a puzzling haiku, Katana has to unravel the intrigue before danger arrives. Luckily for Katana, she has some great friends to help her out.

Katana at Super Hero High is my favorite so far in this series. I loved the story line about discovering the supers' legacies, but I also loved that Yee addresses the pressures from expectations that the supers deal with. I think a lot of young kids will be able to relate. This series is all about empowering young girls and giving them heroes with all their flaws to look up to. My daughter and I both highly recommend this series!

*This post contains an affiliate link. Which means if you click on it and buy something, I get a small fee. Thank you for supporting To Read, or Not To Read.
DC Super Hero Girls Katana at Super Hero High Middle Grade review