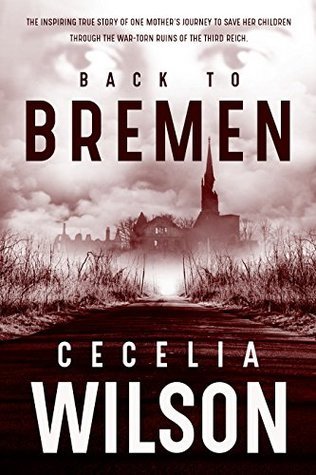 Edith Ropke, her seven siblings, and their mother have learned to be silent and live inconspicuously....It is 1939. On the cusp of World War II, the city of Bremen holds its breath with quiet unease. For years, the Jews have been excluded from everyday life, persecuted at the hands of the Nazis. Now, all of Germany will suffer for their FUhrer's mad ambitions. In his quest for an Aryan utopia, Adolf Hitler invades Poland and Britain declares war on Germany.As Bremen's ports and factories bear the brunt of payloads from RAF Wellington and Lancaster bombers, Edith's childhood is shaped by unrelenting Allied bombing raids, streets strewn with dead bodies, and the ever-present reminder to trust no one outside the family.Seen through Edith's eyes as a child and through her memories as an adult seventy years after the war's end, Back to Bremen depicts her harrowing nine-week journey through war-torn Germany. It's the story of the fear of a child and the sheer determination of a mother risking it all so she and her children can return home. Most of all, it's a vivid reminder of how war creates countless victims, but hope can make heroes of the most common among us

1. Describe Back To Bremen in 120 characters or less.
Back to Bremen is the inspirational true story of Marta Röpke, who wanted nothing more than to raise her children in peace.  But, the Furher’s mad ambitions bring war to Germany’s doorstep, and life in Bremen now means surviving one day and one night at a time.

Left alone with her eight children, Marta has no idea what awaits her family.  She cannot envision the years of fear and destruction on the road before them.  She is just a common woman, but Marta becomes a heroine simply by being a mother.
2. How hard is it to get in the head of a character that has lived a turbulent life?
Interviewing Marta's daughter, Edith, helped bring some insight into how Edith felt during the war years and brought a glimpse of what her mother must have thought during those times.  It certainly helped that I am a mother and, though I've never been through the struggles this family did during the Second World War, I could imagine the emotions I might have experienced had I faced some of Marta's choices.  I admire Marta greatly for being such a strong woman and doing whatever it took to keep her children safe.
3. What does your writing process look like?
With Back to Bremen, the events happened over seventy years ago, but I had the privilege of being close friends with one living child from Marta's family.  I interviewed Edith (now 81 years old) for the story, but her older brother, who still lives in Germany, was able to provide a few details on events Edith had forgotten.  Researching World War II brought a wealth of information to solidify dates and major events during the war, and helped nail down the history to go alongside the family's plight.  I see each chapter as a "mini-story" and, once written, Edith helped edit each individually.  After much polishing, I was ready to submit to a publisher and then, of course, a final round of editing!
4. How long did it take you to complete Back To Bremen?
My interviews were conducted over several months, research, pre-publication edits, and frequent follow-up questions blended together for many months more.  The final draft of Back to Bremen was completed in about a year.  Finding a publisher took another year.
5. What do you like to read in your free time?
I love history and biographies, so I'm most often reading non-fiction stories of historical figures past and present.  It might seem interesting, then, that I also love Jane Austen's works, but I find her characters and settings more than romantic, they are a glimpse into daily life that might otherwise be lost to history.

For more than a decade, Cecelia Wilson has been the Feature Writer for Searcy Living magazine.  Over the years, she has penned articles introducing readers to governors, senators, Grammy Award-winning musicians, and individuals from all walks of life.  In addition to writing articles, books, and youth plays, Cecelia is a singer, pastor’s wife, play director, and acts in community theaters, commercials, film, and television.
Born and raised in Batesville, Cecelia graduated from Batesville High School and earned a Bachelor’s degree from the University of Arkansas at Little Rock.  Cecelia lives in central Arkansas with her husband, Dennis, but manages to check in often with her grown son and daughter, Cody and Cheyenne.