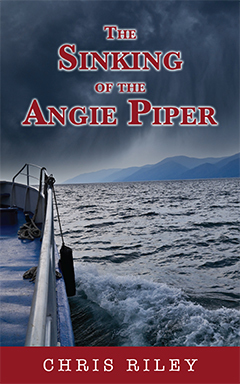 Ed and his childhood friend Danny are gearing up in Kodiak, Alaska, preparing to join the Angie Piper’s crew for another season of crab fishing. Ed is a relative newcomer, but despite the perils of the trade, he sees no reason to fear for Danny’s safety. The Angie Piper has always been blessed. She has a stalwart captain, Fred, a crack engineer, Dave, and two time-tested pros to keep the rest of the operation running smoothly, exuberant Loni and the more reticent Salazar.
Every season has a greenhorn, the one who works for a pittance in order to learn the ropes. This time around it is Ed’s friend Danny, no ordinary crewman. Their shared history is complex. Though strong, brave, and hardworking, Danny is a simple soul, and Ed is weighed down by guilt, dark memories of the many times he failed to defend his friend against the inevitable bullying. And cantankerous Dave believes Danny is a bad omen, so much so that his bitter opposition may endanger them all.
The season starts off strong, and the crew is elated by the bounty of their catch. Then their luck turns. The skies grow dark, the waves swell, and Mother Nature bears down on them with her full arsenal. When the storm finally abates, who will live to tell the tale?

2. Ed is weighed down by guilt. How does his guilt impact his decisions in this book? Throughout the book, Ed feels and expresses his guilt about many things. And for better or worse, this guilt does influence Ed’s decisions about certain things. But eventually, Ed is put in the situation of making an ultimate choice—and this is the choice that decides his character. Ed successfully makes this choice not out of guilt, but out of the simple act of being human. Which is, of course, the realization of his goal.

3. When you're not writing, you're working as a teacher. Has that influenced your writing? Absolutely. Danny Wilson’s character was drafted right out of the pages of my own experiences, in working with persons with special needs. And I think the underlying themes of this novel were, also—compassion, self-sacrifice, friendship, forgiveness—these are all connections I have, at one point or another, observed in my job. I am a very blessed to work as a teacher.

4. You've written many stories, what is some advice you'd give to your young writing self? THE SINKING OF THE ANGIE PIPER is actually my debut novel. But I have written, and had published, dozens of short stories, under the pen name of Christian Riley. Getting back to the question...in other words, is there something I regret doing, or not doing, as it pertains to writing? Not really. I am lucky, in that I feel somewhat satisfied with the decisions I’ve made, the skills I’ve put into practice, the limitations and expectations I’ve placed on myself. I feel I’ve also developed a thick layer of protection, against criticism and rejections. I guess I can say that I feel very comfortable, and content, with being a writer. But there is one regret I have: I wish I had started sooner. It would be quite easy for me to pine over the small amount of stories I will ultimately write, let alone read.

5. What authors have influenced your writing? I love this question. There are so many good authors, and yes, it is entertaining (if not naive) to think that some of them have influenced my writing. They’ve certainly inspired me, though. My favorite author is John Steinbeck, but I’ve enjoyed... Ernest Hemingway, Tim O’Brien, Dan Simmons, William Napier, Louis L’Amour, Jack London, Arthur C. Clarke, Robert Heinlein, Cormac McCarthy...this list would go on, and on. 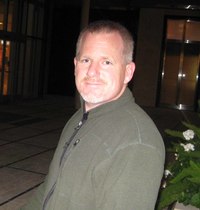 BIO:
Chris Riley lives near Sacramento, California, vowing one day to move back to the Pacific Northwest. In the meantime, he teaches special education, writes stories, and hides from the blasting heat for six months of the year. He has had over 70 short story publications in various magazines and anthologies, and across various genres. Chris is represented by Mark Gottlieb of Trident Media Group, and The Sinking of the Angie Piper is his first novel. For more information, go to chrisrileyauthor.com.

[Every deckhand's fear had become a reality. The thousand-pound cage swept past me, nearly clipping my head as it crashed into the stack of pots to my left. With almost all our gear onboard, there was little room to evade the monstrous block of steel. And if it nailed any of us, we'd certainly be dead or messed up beyond repair."Drop it!" shouted Dave, from under a curtain of rushing water. He had a point—releasing the pot could possibly help stabilize it. But then the thought occurred to me: who would be in the way once that thing came down? Like the weapon of an angry giant, it smashed haphazardly across the deck. Salazar worked madly at the hydro controls in hopes of ending the chaos, but twice he had been knocked down by the surge of saltwater that had turned our deck into a small pond.And then it dawned on me: where was Danny?"Danny!" I hollered. No one seemed to hear me, my voice drowned out by the cacophony of smashing steel, crashing waves, and howling wind. "Where's Danny!?" I repeated.For a brief moment, the pot wedged itself between the portside rail and main-stack. It was a moment of tense hesitation, allowing just enough time for Salazar to take some slack out of the picking crane's cable. I saw Loni at Salazar's side, holding him steady, keeping the deck boss from falling down once again. I still couldn't find Danny, and I continued to scream out for him.All eyes scanned the area, and then panic set in.]