Audiobook Review: An Offer From A Gentleman 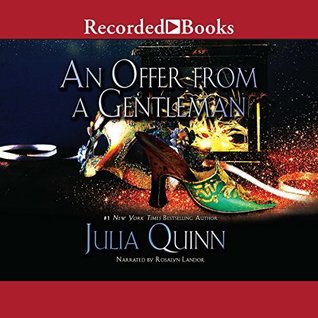 Sophie Beckett never dreamed she'd be able to sneak into Lady Bridgerton's famed masquerade ball - or that Prince Charming would be waiting there for her! Though the daughter of an earl, Sophie has been relegated to the role of servant by her disdainful stepmother. But now, spinning in the strong arms of the debonair and devastatingly handsome Benedict Bridgerton, she feels like royalty. Alas, she knows all enchantments must end when the clock strikes midnight.

Who was that extraordinary woman? Ever since that magical night, a radiant vision in silver has blinded Benedict to the attractions of any other - except perhaps this alluring and oddly familiar beauty dressed in housemaid's garb whom he feels compelled to rescue from a most disagreeable situation. He has sworn to find and wed his mystery miss, but this breathtaking maid makes him weak with wanting her. Yet if he offers her his heart, will Benedict sacrifice his only chance for a fairy tale love?

An Offer From A Gentleman by Julia Quinn is the third book in the delightful series about the Bridgerton family. I listened to the audiobook narrated by Rosalyn Landor. I'm sure Lady Whistledown's Society Papers would give Landor her proper due if she were to review Landor's performance. I'm so glad Landor has continued to and will continue to narrate this book series. I'm sure nobody else could do it justice like she does.

An Offer From A Gentleman has a Cinderella quality to it that makes this book magical from the get-go. And while his book has a fair amount of magic in it, it's a magic of a different kind. Be warned: there are no pumpkins that turn into carriages or mice that turn into footman. But what there is is true love, family squabbles, and a wicked stepmother.

Sophie Becket knew she was a bastard, in fact everyone knew it. She lived with her father, the sixth Earl of Penwood, who treated her like a ward, not a daughter. When the earl married, his bride brought her two daughters with her. Sophie thought at last she'd be part of the family. She was wrong. Her stepmother wanted nothing to do with her, and when the earl died, it went from bad to worse.

However, Sophie never expected that one night her life would change forever. She, with the help of the other servants, was able to attend Lady Bridgerton's masked ball. It was there that she meets Benedict Bridgerton, her Prince Charming. They had a wonderful night together where everything is just perfect. At the stroke of midnight, of course, Sophie has to leave. All that she leaves behind is a glove. The next morning Sophie's stepmother kicks her out of the house and Sophie is forced to face the cold, hard world on her own.

Benedict Bridgerton never expected to meet the love of his life at his mother's masquerade, but the moment he sees Sophie time stops. He doesn't know the name or the face (she's wearing a mask) of the woman who bewitched him, but he does know he wants to spend the rest of his life with her. But when the clock strikes midnight, she rushes out the door, leaving him utterly heartbroken.

A few years go by and the two cross paths again. Only Benedict doesn't recognize her, and Sophie doesn't want him to. Sophie is a maid and she knows that she and Benedict could never marry because their stations in life are so far apart. Sophie also won't be his mistress because she knows the pain of being a bastard. Benedict is utterly charmed by Sophie. They both know they can't be together, yet their attraction to each other can't keep them apart.

An Offer From A Gentleman is another great chapter in the Bridgerton's history. While it has some similarities to Cinderella, it also has many differences. Some of the characters are charming, some are loathsome. I didn't like Sophie half as much as I liked Kate from The Viscount Who Loved Me. Sophie had her own charms and principles that made her a good character and a perfect match for Benedict. Also, I hope one of these days we learn who the mysterious Lady Whistledown is. I, for one, am dying to know. I can't wait to see what the Beidgertons get up to next!

*I received a copy of this audiobook for review by Recorded Books. This is no way has influenced my opinions in my review.