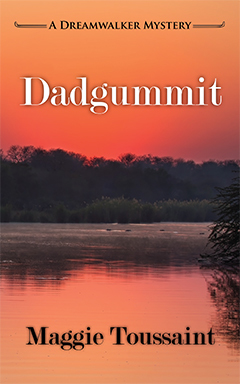 It is a good and wondrous thing to write a book that makes readers clamor for more. If your muse and the publishing word align, you might even squeeze out a second book that still feels fresh and exciting.

This is how things were tracking for my amateur sleuth, Baxley Powell. This reluctant psychic realized she must embrace her extra talents and become the dreamwalker, a job that was killing her dad as he was not a good fit for the job. In addition to her ability to carry messages between the living and the dead, she can tell when someone is lying.
In addition to the psychic elements, there are two series arcs I continue to explore. The mystery of Baxley’s missing-in-action soldier husband and the mystery of her watcher in the woods. I reveal just enough about each of these elements in a book to keep the reader reaching for the next book in the series.

It is most often reported that psychics have one strong gift. However in a fictional series, and especially one where the readers are pre-disposed to suspend disbelief, my goal was to explore a new psychic talent with each book of the series. In the second book of the series, Baxley is able to do readings off objects that someone in the grip of strong emotion has touched.
With each book, many of the cast of characters reveal more strengths and weaknesses. Also, as a newbie psychic, Baxley makes mistakes in both worlds, which up the stakes and tension. Then comes book three. The pressure is on to make the next book even better.

This time instead of adding a new psychic gift, I added a character who is a medium and doubled the homicides in a town where a film company is creating scenes n location from a movie mostly filmed elsewhere. As a bonus, my sleuth gets to pal around with film stars.

Which brings us up to another series entry. In the span of a few books, a regular homicide wave landed on a sleepy southern town. I didn’t want my fictional town to become like Jessica Fletcher’s Cabot Cove, where a new person is murdered every week of the TV show, so I took my sleuth on vacation. Several wonderful things converged, and I used Cherokee mythology, personal experience, as well as folklore, to add depth to the plot of book four, Dadgummit.

In summary, these tips help keep a series fresh:
1) Start with a premise that excites you.
2) Find a way to make each book seem new and also to stand on their own.
3) Vary setting, supporting characters, types of homicides, and more.
4) Trust your inner editor to know when the book is written to your satisfaction.
5) Resolve the homicide or mystery within each book.
6) Leave a few series threads unresolved to keep the reader coming back.

AUTHOR BIO: Southern author Maggie Toussaint writes mystery, suspense, and dystopian fiction. Her work won the Silver Falchion Award for best mystery, the Readers’ Choice Award, and the EPIC Award. Under her name and her pen name of Rigel Carson, she’s published sixteen novels as well as several short stories and novellas. The latest book in her paranormal mystery series, Dadgummit, released August 1, 2017. Maggie serves as Chapter President for Southeast Mystery Writers of America and as Vice-President for Low Country Sisters In Crime. Visit her at www.maggietoussaint.com.