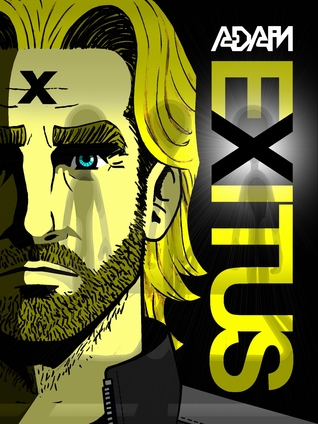 Adam Exitus is the debut novel by Australia’s most exciting new science-fiction voice, Nicholas Abdilla and edited by award-winning author Chris Stead. It is also the first book in the Adam X series, a massive, immersive new universe in the tradition of epic space sagas like Star Wars, Hyperion and Imperial Radch, and inspired by authors like Timothy Zahn, Kevin J. Anderson, James Luceno and Michael Anderle. Filled with mystery, romance and heart-pounding action, it’s the best science-fiction book of 2017. 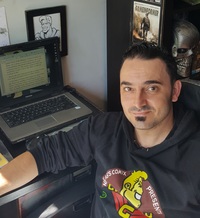 1. You've been been writing and drawing comics since the age of four. What authors/comic books inspired you the most growing up?
In terms of inspiration when I was a kid I remember MAD magazine being a huge influence. Growing up my dad would buy me the new issue every month, and most of my early comics emulated there work and was satirical in nature. Once I hit my teens it was all superheroes, my favorite being Spider-man comics which I still collect to this very day. But if we're talking actual writers who inspired me, it would have to be Neil Gaiman and Frank Miller. The work they did on Sandman and Sin City taught me comics as a medium didn't have to be just for kids. They wrote stories that were very deep and adult and made me want to spend my life doing the same.

2. Adam Exitus is your first novel. How is writing a novel similar to/different from writing a comic book?
I have found writing a novel compared to writing a comic to be a different but equally rewarding. As a rule a speech bubble should never contain more than thirty words, so when you're creating a comic a lot of what you want to say ends up getting chopped and you really have to rely on your art to get the rest of the story across. As much as I enjoy it, it can be a challenging at times because once the panels are drawn there is very little wiggle room in how you tell your story. If you have a new idea you want to add later you now have space restrictions that don't allow change. I think that's why I enjoyed writing my first novel so much. It gave me a freedom to my storytelling I've never known before. Going over the story over and over, fine tuning it until it feels just right was very satisfying and I am extremely proud of the end result. That's why I think I will continue writing novels for the foreseeable future.

3. Tell us a little bit about Adam.
The best way I can describe Adam is: ordinary man, extraordinary circumstance. He's a normal guy who finds himself if this bizarre situation and just wants what anyone would want if they were in his shoes. He wants to go home. That's essentially what his story is about. A journey home. With a few twists and turns on the way.

4. When you're not writing or creating comic books and or novels, what do you do?
When I'm not writing or drawing I enjoy movies, reading -both novels and comics- and playing video games. Pretty much any medium that can tell a story I have an interest in.

5. What advice would you give to aspiring writers?

I guess I would advise them to write whatever they feel like and not to get bogged down with whether or not what they're writing will actually make money or get published. Writing is a great way to express oneself but that doesn't mean everything written is meant to be a bestseller. The more stories you write the more experience you gain and the more chance you'll stumble across that one great character that resonates with you and others. Write because you love it, not to make a fortune.