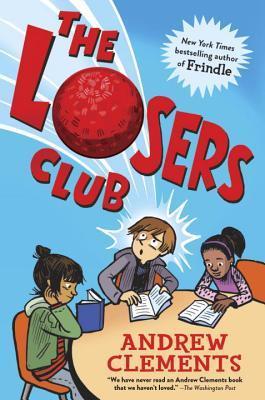 The beloved New York Times bestselling author of the modern classic Frindle celebrates books and the joy of reading with a new school story to love!Sixth grader Alec can't put a good book down. So when Principal Vance lays down the law--pay attention in class, or else--Alec takes action. He can't lose all his reading time, so he starts a club. A club he intends to be the only member of. After all, reading isn't a team sport, and no one would want to join something called the Losers Club, right? But as more and more kids find their way to Alec's club--including his ex-friend turned bully and the girl Alec is maybe starting to like--Alec notices something. Real life might be messier than his favorite books, but it's just as interesting.

With The Losers Club, Andrew Clements brings us a new school story that's a love letter to books and to reading and that reminds us that sometimes the best stories are the ones that happen off the page--our own!

If the Losers Club existed when I was in school, I would have been a member. The Losers Club is an after school club where the members just read. That's it! Don't you want to be a member of this club?

Alec is in sixth grade. He's a bookworm. The only problem is he can't seem to put his books down--even in the classroom. This year he and his kid brother are attending an after school program. According to the rules, he must find a club to join or he can make one up as long as he can find one other person to join him. And that's when the Losers Club is born. Alec names it the Losers Club because he doesn't want anyone else to join; he just want to sit and read without being disturbed. The only problem is, people do want to join. Alec soon finds out his plan to read in solitude is not as easy as he thought.

The Losers Club is a love letter to books. The power of books is amazing. You can transcend time and space. You can be different people and live different lives without leaving home. And as much as this book is about reading, it's also about overcoming adversity, bullying, and problem solving. Bookworms will love this book. And one of the best parts: A list of all the books mentioned is in the back of the book. Because after you read The Losers Club, you're going to want to read all the books mentioned in it.

*I received an advanced readers copy in exchange for a fair review. This post contains an affiliate link.