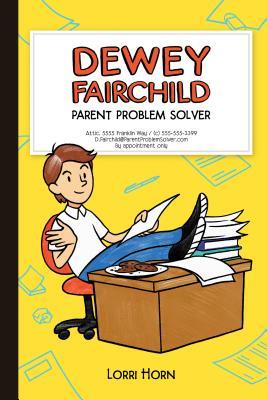 Publisher’s Synopsis: Dewey Fairchild isn’t just good with parents, he’s great with them. He’s so good at handling parents that he’s built a thriving business out of it. He even has a secretary, Clara―a great alibi and an even better baker. Dewey settles the most troublesome of cases, from an overprotective mom who won’t let her child go to class on her own, to a dad who can’t stop picking his nose any chance he gets!
Dewey has no problem handling other people’s parents, but when he overhears his parents talking one day, he faces a challenge he never expected. Dewey can solve any problem parents may cause, but what will he do when the parents who are causing problems are his own? 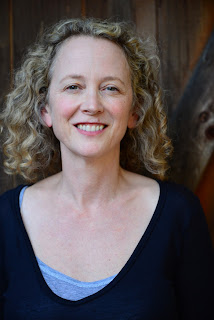 About the Author: Lorri Horn is an educator and an author. She has a degree in English, a teaching credential, has been Nationally Board Certified, and has taught pubic school for over 14 years. She loves cheese (and wants it to be its own food group, which made working on a vegan book a challenge), humor, baking, books, and spending time with her family. Lorri’s background as a career schoolteacher and instructional leader make her especially sympathetic to the needs and perspectives of children, and this sensitivity features in her work as an author. Lorri blogs on her website, lorrihorn.com. Her work has appeared in The Los Angeles Times, The Huffington Post, Phi Delta Kappan, The College Board and Mayim’s Vegan Table. Lorri lives in California with her husband, son, and their dog, Wolfie.
About the Illustrator: Agnieszka Grochalska is an illustrator living and working in Warsaw, Poland. As a child she wanted to be an astronaut or a jet pilot. Eventually she changed her mind and dedicated her keen eye and steady hand to drawing precise and detailed compositions reminiscent of classical storybook illustrations.
She received a MFA in Graphic Arts in 2014, exploring traditional painting, printmaking, and sculpting along the way. Currently she works predominantly in digital medium, striving to make it look as natural as her works drawn traditionally. Her illustrative works were featured in group exhibitions both in Poland and abroad.
Agnieszka enjoys travel and cultural exchange with people from around the world, referencing those experiences in her works alongside the Slavic folklore of her homeland. When she isn’t drawing or traveling, you can find her exploring the worlds of fiction in books and story-driven games.
Agnieszka’s works can be viewed in her online portfolio at agroshka.com.

The Humor of Overactive Parents in Books for Kids

I don’t know about you, but every time I hear the term “helicopter parenting” I want to duck for cover. It’s not that I’m so opposed to the concept as much as I’m afraid something is about to swoop down and take off my head. Usually, I’m not so far off— “Ten Warning Signs You Are a Helicopter Parent (and How to Stop)”; “You Might Be a Helicopter Parent If…”; “How Helicopter Parenting is Ruining America’s Children”. Hang on now; while I grab that head of mine rolling down the helipad and try to slap it back onto my shoulders long enough to endure all this blame. Were the latchkey 80s kids really so much better off than our helicopter ones? It’s all longitude and latitude. Last year, Marine One carried Obama. This year, it carries Trump. These little soldiers of ours evidently too afraid to parachute from our laps this decade will be raising their own kids the next, hitching rides barefoot to corner stores rolling around in the back of Amazon copter-drones.

Nah, we are what we eat, as they say. And, unless there’s some serious deviant behavior or abuse going on, then most of us end up either reacting to or repeating what we’ve experienced before, one way or another, in ways our kids can endure. We’re all just human, after all. Good to know what makes us tick and talk as we do. Nothing that about twenty-five years of psychoanalysis might not do you good for. But not only does the media whirly wind its way in to tell you that your parenting has rendered your child likely unable to pull the covers off her dorm room head, or in jail for knocking out his college professor for a B-, but they market to you, too. I just now opened online one of those If-You-Love-Your-Kid-Why-Do-You-Hold-a-Pillow-Over-Her-Face-Huh?-Huh? articles from a reputable source, a box appeared over my computer screen— “Yours Free: Our Popular 6-Part-Mini-Course How to Be a Positive Parent—Want to Raise loving, happy, well-adjusted kids without the nagging, screaming, stress and drama? This mini-course gives you everything you need to know. Simply enter your email below to get started.”

Oh-my-GOOOOODDDDD! Thank you so. Much! Kick me down and then inflate me back up as easy as this pop-up window!

No. I am not a fan of the term Helicopter Parenting. But you just have to laugh. And duck. You should duck and laugh. The humor of overactive parents in books for kids is that it rings true. But it doesn’t cut off your head. I don’t know about you. I like my head. Next generation we’ll laugh about the humor of the latchkey kids again. Tom Sawyer, Pippy Longstocking, anyone?

*This is a sponsored post. I work in partnership with The Children’s Book Review and Amberjack Publishing.