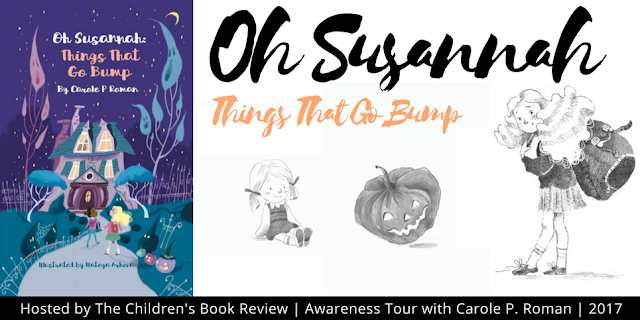 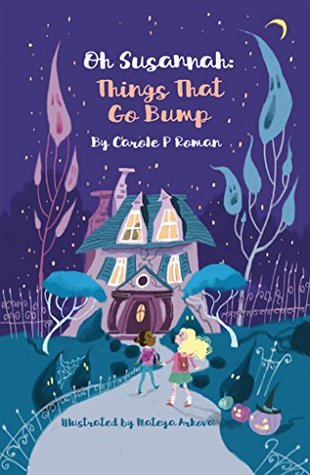 Written by Carole P. Roman
Illustrated by Mateya Arkova
Publisher’s Synopsis: Susannah Maya Logan is not having a good day. She doesn’t want to go to her best friend, Lola’s sleepover. Susannah thinks the house is big and spooky, not to mention the ghost that is said to live there. Lola’s big brother, Kai, loves to tease Susannah with scary stories. Throughout her day, she sees people deal with things that scare them. Her sight-impaired friend, Macy, is terrified of unicorns, of all things. She sees a boy at a party who’s frightened of clowns. Her teacher is afraid of getting a cold. Susannah realizes everybody is scared of something. She wishes she was more like Lola, who is not afraid of anything, or so it seems. Susannah discovers people have different ideas of what is scary and what is not, and only they can determine the difference. Join Susannah as she learns to confront her fears and not let her imagination prevent her from having fun.

Susannah Logan has been invited over to her best friend's house for a slumber party. What girl wouldn't be excited over that? Susannah wants desperately to go, but there's a problem. She's afraid of her best friend's house. It's old and creepy. Not to mention her bff's brother tells Susannah that the place is haunted. As the sleepover draws near, Susannah realizes she's not the only one scared of something. In fact, she's surrounded by people that have a fear of one thing or another. Seeing that she's not alone helps Susannah face her fears.

In this wonderful new book by Carole P. Roman, children will learn everyone is afraid of something. For me it's clowns and spiders. Susannah will help kids learn to face and overcome their fears. Though this book is a great read anytime, it's perfect for Halloween--when things go bump in the night.

Carole P. Roman is the award-winning author of the Captain No Beard series. Both Captain No Beard: An Imaginary Tale of a Pirate’s Life and Captain No Beard and the Aurora Borealis have received the Kirkus Star of Exceptional Merit. The first book in the series was named to Kirkus Reviews Best 2012. Captain No Beard and the Aurora Borealis has been named to Kirkus Reviews Best of 2015. Each book in the series has won numerous awards including the NABE Pinnacle Award, IAN Award, Moonbeam Award 2014, National Indie Excellence Award Finalist, Shelf Media Outstanding Series Award, ForeWord Review Five Star and Finalist in the Book of the Year, and Reader’s Views Children’s Book of the Year 2013. Roman is also the author of the award-winning non-fiction culture series, If You Were Me and Lived in… that explores customs and cultures around the world. She has co-authored a self help book, Navigating Indieworld: A Beginners Guide to Self-Publishing and Marketing. She lives on Long Island with her husband and near her children and grandchildren.

*I worked in partnership with The Children’s Book Review and Carole P. Roman for this post.