Audiobook Review: The Mother of All Questions by Rebecca Solnit 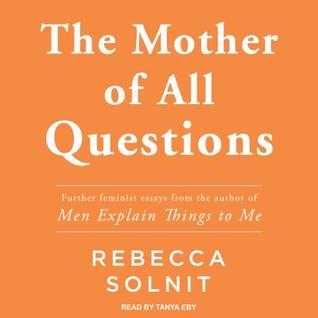 In a timely and incisive follow-up to her national bestseller Men Explain Things to Me, Rebecca Solnit offers sharp commentary on women who refuse to be silenced, misogynistic violence, the fragile masculinity of the literary canon, the gender binary, the recent history of rape jokes, and much more. In her characteristic style, Solnit mixes humor, keen analysis, and sharp insight in these eleven essays.

It seems like in this day and age we shouldn't still be talking about sexism. Surely the human race should have evolved by now. But somehow we seem to keep having the same conversation day after day. It doesn't matter what political party you belong to, your age, race, or how much money you make, you've probably been a victim of sexual harassment or assault. If not, you probably know somebody who has. From government officials, newscasters, producers, to even managers at your local burger joint, sexual harassment is wide spread.

After last week's huge bombshell with HW, I read a few articles on the heinous alleged crimes committed by this sexual predictor. I was curious to find out if other people were as disgusted as I was, so I did what you really shouldn't do. I read the comments. I found myself bewildered over the negative comments toward the victims and not toward the criminal himself. Victim blaming. Have we as a society been brainwashed to think that if an assault happens it's because the victim was somehow asking for it? That it's part of the burden of being a woman? We should just take it?

If there is one good thing about what happened is that there is an ongoing conversation happening about how far reaching sexual assault and harassment is. And maybe now that it's being talked about out in open, we can finally do something about this dysfunctional climate. When a victim steps forward and tells their story it helps other women step forward. #NoMore #MeToo

Rebecca Solnit writes on many topics such as art, politics, and the environment. She writes with humor and grace. In The Mother of All Questions, Solnit writes on topics such as the rape culture, women who refused to be silent, violence against women, literature, film, and so much more. Each essay has a powerful message that enrages, empowers, and is thought provoking. Solnit's passion shines through every word. Though some of her points are repeated throughout the book, I didn't mind. Mostly because it bears to be repeated. After all, how many times have we had this conversation, and yet, the same things keep happening. Solnit is a powerful voice in today's world. The Mother of All Questions should be required reading.

I listened to The Mother of All Questions on audio. It's read by Tanya Eby, who has a ton of credits to her name. Her voice is very personable and pleasant, and was the perfect choice for reading the essays. She seemed to emulate Solnit's passion for the subject matter. I enjoyed listening to this on audio and recommend it.