Review and Giveaway: Death in the Stacks 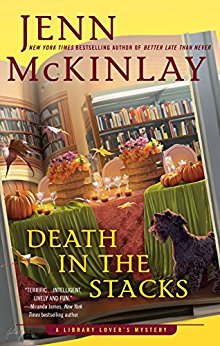 Lindsey Norris and her staff are gearing up for the Briar Creek Library's annual Dinner in the Stacks fund-raiser. The night of dinner and dancing is not only a booklover's dream--it's the library's biggest moneymaker of the year. But instead of raising funds, the new library board president is busy raising a stink and making the staff miserable.

Although Olive Boyle acts like a storybook villain, Lindsey is determined to work with her and make the event a success. But when Olive publicly threatens the library's newest hire, Paula, Lindsey cracks like an old book spine and throws Olive out of the library.

The night of the fund-raiser, Lindsey dreads another altercation with Olive--but instead finds Paula crouched over Olive's dead body. Paula may have secrets, but Lindsey and the rest of the crafternooners know she's not the one who took Olive out of circulation. As the plot thickens, Lindsey must catch the real killer before the book closes on Paula's future . . .

With eight books, A Library Lovers Mystery series has been going strong since 2011. And yet, Death in the Stacks is my first introduction to this wonderful world of books and mystery. I was a little worried jumping into the eighth book without reading the previous ones, however my fears were soon put at ease. From the opening page I felt like I had been along for the ride the whole time.

I have to admit I'm pretty jealous of the main character, Lindsey Norris. In the first chapter we meet her riding her bike on a beautiful fall day to the Briar Creek Public Library, where she works as the town librarian. From the description it sounds like the perfect place to work for a book lover. Her staff ranges from studious to quirky all-around good human beings. I found myself envious of her work environment. That is until Olive Boyle walks in. Olive is a blight on the buttock of humanity. I found myself hoping she was the one who would get murdered. And as if the author heard my wish, she did in fact get bumped off.

The lists of suspects in the Olive Boyle murder could fill an entire encyclopedia. Olive ruled with fear and intimidation. And it seems everyone has a motive. However before Olive died, she hinted that one of the library's employees, Paula, had a dark past and was a danger to the public. Not only that, some of Paula's actions after the murder make her look a little guilty. Lindsey doesn't want to get involved in the case, but she believes in Paula's innocence. So, she puts on her metaphorical Sherlock hat and with the help of her Watson—a.k.a.Robbie—she begins her investigation.

I found myself enamored with the New England town of Briar Creek and its residents. Well, most of them anyway. Jenn McKinlay has written a cozy mystery that will leave readers guessing as to who the real killer is. I love all the bookish mentions and also learning about crafternooners. I even love that in the back of the book she had a reader's guide for The Talented Mr. Ripley, a book they read in the crafternooners, plus recipes and a knitting pattern. It may even inspire you to start your own club. Death in the Stacks is a great book to read with friends, a book club, or by yourself. Either way, you'll be entertained.

Thanks to Berkley Books, I have a copy to give away to a lucky reader! You must be at least 13 years old to enter. This contest is open to US addresses only. Please read our giveaway policy before entering. If you're having trouble with the form, click here.