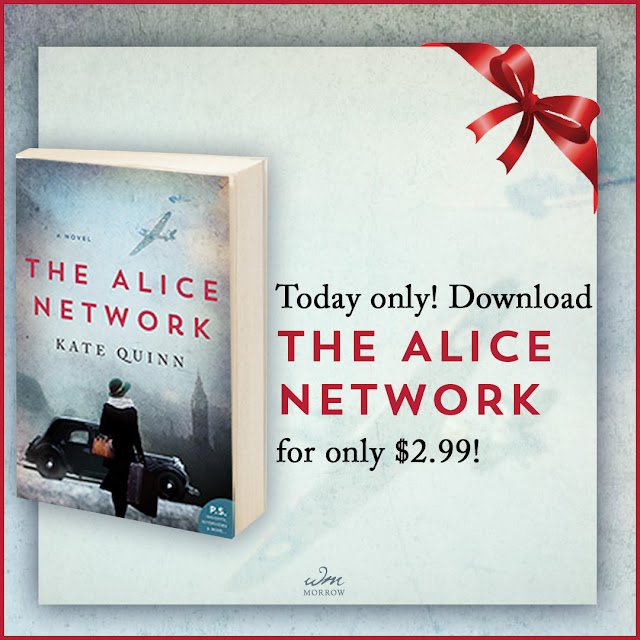 Buy from Amazon
ABOUT KATE QUINN
Kate Quinn is a native of Southern California. She attended Boston University, where she earned bachelor’s and master’s degrees in classical voice. A lifelong history buff, she has written four novels in the Empress of Rome Saga and two books set in the Italian Renaissance detailing the early years of the infamous Borgia clan. All have been translated into multiple languages. She and her husband now live in Maryland with two black dogs named Caesar and Calpurnia.

ABOUT THE ALICE NETWORK
In an enthralling new historical novel from national bestselling author Kate Quinn, two women—a female spy recruited to the real-life Alice Network in France during World War I and an unconventional American socialite searching for her cousin in 1947—are brought together in a mesmerizing story of courage and redemption.
1947. In the chaotic aftermath of World War II, American college girl Charlie St. Clair is pregnant, unmarried, and on the verge of being thrown out of her very proper family. She's also nursing a desperate hope that her beloved cousin Rose, who disappeared in Nazi-occupied France during the war, might still be alive. So when Charlie's parents banish her to Europe to have her "little problem" taken care of, Charlie breaks free and heads to London, determined to find out what happened to the cousin she loves like a sister.
1915. A year into the Great War, Eve Gardiner burns to join the fight against the Germans and unexpectedly gets her chance when she's recruited to work as a spy. Sent into enemy-occupied France, she's trained by the mesmerizing Lili, the "Queen of Spies", who manages a vast network of secret agents right under the enemy's nose.
Thirty years later, haunted by the betrayal that ultimately tore apart the Alice Network, Eve spends her days drunk and secluded in her crumbling London house. Until a young American barges in uttering a name Eve hasn't heard in decades, and launches them both on a mission to find the truth...no matter where it leads.

PRAISE FOR THE ALICE NETWORK
“The Alice Network has history, suspense, romance and women kicking butt. I couldn't put it down.”—NPR.org

“With her latest novel, Kate Quinn announces herself as one of the best artists of the genre. The plotting is seamless, the pace breathtaking, and the prose is both vivid and laced with just the right amount of details. Fans of historical fiction, spy fiction and thrilling drama will love every moment of THE ALICE NETWORK. It‘s a masterful novel that will leave you craving more.”—Book Page

“Those looking for intrigue and danger in their summer fiction may be drawn to Quinn’s (Mistress of Rome) latest... This fast-paced story offers courageous heroines, villains you love to hate, and dramatic life-or-death stakes. A compelling blend of historical fiction, mystery, and women’s fiction, Quinn’s complex story and engaging characters have something to offer just about everyone.”
—Library Journal,

“Lovingly crafted and brimming with details, readers are sure to be held in Quinn’s grip watching as the characters evolve. Powerful reading you can’t put down!”—RT Book Reviews, 4.5 star, “Top Pick”

“Smart, suspenseful and adventurous, The Alice Network is a worthy homage to the female spies of World War I of which Quinn should be proud.”—Shelf Awareness

“Both funny and heartbreaking, this epic journey of two courageous women is an unforgettable tale of little-known wartime glory and sacrifice. Quinn knocks it out of the park with this spectacular book!”—Stephanie Dray, New York Times bestselling author of America's First Daughter

“The Alice Network... perfectly balances a propulsive plot, faultlessly observed period detail, and a cast of characters so vividly drawn that I half expected to blink and see them standing in front of me. This is historical fiction at its best--thrilling, affecting, revelatory.”—Jennifer Robson, international bestselling author of Moonlight Over Paris

“Kate Quinn delivers an enthralling tale filled with breath-taking narrative that will make the reader feel as if they’re in the back of the roadster, riding along with the raucous Eve and courageous Charlie on their clandestine adventures. Suspenseful and engrossing, THE ALICE NETWORK is a must-read!”—Heather Webb, author of Rodin's Lover

“A ring of daring female spies known as the Alice Network left a legacy of blood and betrayal. Two women suffering the losses of two different wars must join forces, one to find her voice and her redemption, the other to face her fears and her oldest enemy. Kate Quinn strums the chords of every human emotion with two storylines that race over continents and through decades to converge in one explosive ending.”—Marci Jefferson, author of Enchantress of Paris

"A powerful story filled with daring and intrigue, The Alice Network will hook readers from the first page and take them on an unforgettable journey."—Chanel Cleeton, author of Next Year in Havana

“Line for line, one of the best books I’ve read in a long time. Loyal and brave, the women of THE ALICE NETWORK are brilliantly revealed by Kate Quinn’s exquisite storytelling and prose. I loved every word! A must read for fans of WWI and WWII fiction.”—Renee Rosen, author of Windy City Blues