Penguin Classics has released a deluxe edition of Anne of Green Gables and it's EVERYTHING! 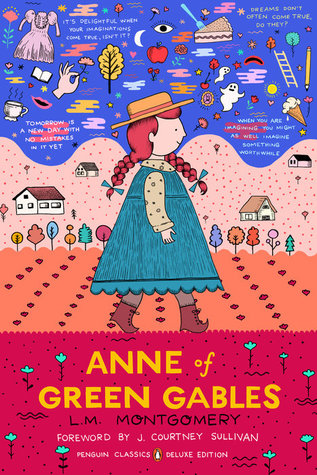 The beloved coming-of-age tale of a spunky heroine named Anne "with an E," now for the first time in Penguin Classics and packaged in a Deluxe edition.
L. M. Montgomery's novel Anne of Green Gables recounts the adventures of Anne Shirley, an 11-year-old orphan mistakenly sent to a pair of siblings who intended to adopt a boy to help work on their farm in Prince Edward Island. Yet Anne's quirky personality and good-natured spirit causes the siblings to grow to love her anyway, and soon the entire town falls for the precocious little girl with bright red hair. Cherished by both children and adults, Anne of Green Gables is a celebration of fierce individualism, and the families we create, rather than the ones we are born into. This Deluxe edition is enhanced with a foreword by bestselling author J. Courtney Sullivan, and an introduction and suggestions for further reading by Benjamin Lefebvre, as well as reviews and a selection of early writing by L. M. Montgomery about the process of writing Anne.

I fell in love with Anne of Green Gables at an early age. So early, I can't remember a time in my life where I wasn't a fan. In fact, I wanted to be Anne. Gilbert Blythe was my first crush. I wanted to move to Prince Edward Island and live happily ever after. I know I'm not the only one though. Anne of Green Gables has sold over 50 million copies, and I'm not ashamed to say I've bought more than a few. It's been made into films, television movies, and plays. My favorite is the 1985 television adaptation starring Megan Follows and Colleen Dewhurst. I've watched to so many times, I know it by heart.

From the first sentence--

Mrs. Rachel Lynde lived just where the Avonlea main road dipped down into a little hollow, fringed with alders and ladies' eardrops and trasversed by a brook that had its source away back in the woods of the old Cuthbert place; it was reputed to be intricate, headlong brook in its earlier course through the woods, with dark secrets of pool and cascade, but by the time it reached Lynde's Hollow it was quiet, well-conducted little stream, for not even a brook could run past Mrs. Rachel Lynde's door without due regard for the decency and decorum; it probably was conscious that Mrs. Rachel was sitting at her window, keeping a sharp eye on everything that passed, from brooks and children up, and that if she noticed anything odd or out of place she would never rest until she had ferreted out the whys and wherefores therof.


--to the last, Lucy Maud Montgomery spellbinds you with her prose. The Cuthberts, the town, the people will make you fall in love. The main character, Anne Shirley, steals your heart and carves her initials on it. I was able in the past few years to share with my daughter my love for this author and for Anne. It did not surprise me in the least that she took to Anne as I had. Because who doesn't love an intelligent, curious, imaginative, precious little girl who isn't afraid to be herself.

This brand new deluxe edition is perfect for the Anne enthusiasts out there. It has a beautiful cover and an foreword by J. Courtney Sullivan and an introduction by Benjamin Lefebvre. Also, I loved the suggestions for further reading page. I've added a few things to my wish list. If you've not yet had the pleasure of reading this beloved classic, now is the time. If you have, you might consider buying this book for yourself or someone you love, or like, or maybe just a vague acquaintance. Because everyone deserves Anne. And although this isn't scientifically proven, I believe reading this book can cure depression, boost the economy, and maybe even bring about world peace.