Audiobook Review: The Year of Yes by Shonda Rhimes 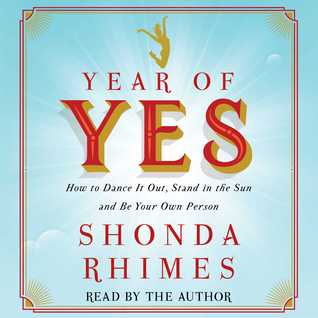 Year of Yes: How to Dance it Out, Stand in the Sun, and Be Your Own Person
By Shonda Rhimes
Read by Shonda Rhimes
7 hours and 14 minutes
Simon and Schuster Audio

The mega-talented creator of Grey’s Anatomy and Scandal and executive producer of How to Get Away With Murder chronicles how saying YES for one year changed her life―and how it can change yours, too.

With three hit shows on television and three children at home, the uber-talented Shonda Rhimes had lots of good reasons to say NO when an unexpected invitation arrived. Hollywood party? No. Speaking engagement? No. Media appearances? No.

And there was the side benefit of saying No for an introvert like Shonda: nothing new to fear.

Then Shonda’s sister laid down a challenge: just for one year, try to say YES to the unexpected invitations that come your way. Shonda reluctantly agreed―and the result was nothing short of transformative. In Year of Yes, Shonda Rhimes chronicles the powerful impact saying Yes had on every aspect of her life―and how we can all change our lives with one little word. Yes.

I had purchased Year of Yes on audio way back in August 2016. It sat quietly in my audible library waiting on me to finally say YES to it. And, well, that didn't happen until December 2017. Year of Yes was my last listen of 2017 as well as my first of 2018. I had been going through what I call a funk during October and November. I didn't really want to do anything or go anywhere. I wasn't depressed; I was just sort of burned out on life. In December, as I was scrolling through my library, I came across this audiobook and realized I had not listened to it yet. And maybe, just maybe, it would be the motivation I needed to help me get over my funk.

I first became aware of Shonda Rhimes because of Grey's Anatomy. From the first episode I was hooked. A few years ago I became a fan of How to Get Away With Murder. Side bar: Viola Davis is a master of her craft and she deserves all the awards! I still have yet to watch Scandal, but somehow I know I'll love it as well. So it's safe to say Rhimes knows how to write killer television series. And despite her epic dramas and phenomenal writing skills it was the title of her book that grabbed my attention: Year of Yes: How to Dance it Out, Stand in the Sun, and Be Your Own Person.

One of the reasons the title grabbed my attention is because I had been saying no a lot. No to nights out with friends. No to events. No to my family. I felt overwhelmed by my responsibilities: work, school, mom, wife, trying to be everything to everyone. It's exhausting. Also, I'm an introvert. Which means I basically want to hide in my hobbit hole for days at a time. My husband is an extrovert as well as one of my children. And I think it's hard for them to understand why I need downtime. But I also felt guilty. Am I spending enough time with my kids, my husband? Should I be saying YES more?

So, on a cold December day I started Year or Yes. Shonda (I feel like we should be on a first-name basis now) describes how one little comment made by her sister led her to start her year of yes. Saying yes to things, especially things that scared her, was a liberating experience. It literally changed her life, her attitude, her way of living. Shonda doesn't hold back. She talks about her amazing family and friends, and how they helped her on her path to yes. No man or woman is an island and she gives credit where credit is due. I also like how she pointed out that sometimes we say yes to things by our actions that we should really be saying no to. By the end of the first chapter I was ready to start saying YES to more things in life. Now, I don't have Shonda's resources, so I still have to be choosy about when I say YES. Because this girl needs her sleep!

Year of Yes was narrated by the author as well. And I'm glad it was. Shonda has an easygoing conversational manner about her as if she's a friend about to give you some epic advice. So you might want to pour yourself a glass of wine and get comfortable. Year of Yes is inspirational, especially if you're not really feeling it these days. Shonda's vulnerability, humor, and journey will help you find the courage to say YES to life.