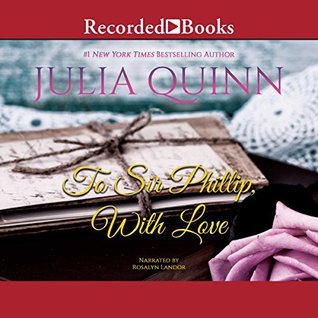 Sir Phillip knew from his correspondence with his dead wife's distant cousin that Eloise Bridgerton was a spinster, and so he'd proposed, figuring that she'd be homely and unassuming, and more than a little desperate for an offer of marriage. Except . . . she wasn't. The beautiful woman on his doorstep was anything but quiet, and when she stopped talking long enough to close her mouth, all he wanted to do was kiss her...

Eloise Bridgerton couldn't marry a man she had never met! But then she started thinking... and wondering... and before she knew it, she was in a hired carriage in the middle of the night, on her way to meet the man she hoped might be her perfect match. Except... he wasn't. Her perfect husband wouldn't be so moody and ill-mannered. And he certainly should have mentioned that he had two young - and decidedly unruly - children, as much in need of a mother as Phillip is in need of a wife.

And now we come to Eloise's story. I must admit I was pretty excited for To Sir Phillip, With Love. Julia Quinn has given her audience a small look into Eloise's life. I couldn't wait to see what the author had in store for this bold heroine.

I was lucky enough to listen to this book on audio, which I think I prefer. The estimable Rosalyn Landor is back narrating and as always does a phenomenal job.

I'm not going to lie or gloss over anything. This book deals with some serious issues: suicide and child abuse the main ones. I know this can be a sensitive issue for some people, so I wanted to put that out there right off the bat.

It starts with a letter. After Sir Phillip's wife dies, he receives a letter from a distant cousin of hers: Eloise Bridgerton. Eloise, who is very proficient in her correspondence, is exactly what Sir Phillip needs. After a year of exchanging letters he invites her to stay at his house to see if they'd suit as man and wife. What he didn't expect is for Eloise to show up on his doorstep unannounced and unchaperoned.

Eloise has always been independent, but she acted rather impulsively when she takes off in the middle of the night to stay with a man she's never met. But when she arrives at his house, she wonders if she's made a grave mistake. Not to mention his unruly children, who are no match for the woman who grew up surrounded by her numerous brothers and sisters. But can she gain their favor?

I'm not sure who I pictured would be the perfect mate for Eloise, but I'm sure I didn't imagine anyone like Sir Philip. He and Eloise are very much opposites. This book had a darker feel than the rest and definitely dealt with some major issues. Overall, I did like the story. I like that it dealt with the aftermath of suicide and the lasting effects it can have on loved ones. I also liked that it dealt with the healing process as well.

To Sir Phillip, With Love is a little bit deeper than the rest of the books, so far, in this series. Please don't let that scare you away. There's still plenty of steaminess to go around.